Shah Rukh Khan is termed the king of Bollywood by many. Back in 2008, he surprised his fans by buying a cricket team in the Indian Premier League (IPL) — Kolkata Knight Riders (KKR). But he didn’t leave it at that, he supported the team by being present at the KKR matches, which helped boost the team’s fan base. And now that the tournament has entered its eleventh edition, his support for the team has reached the next level.

Right from the beginning of KKR’s journey in this season, King Khan marked his presence at the match venues. At Eden Gardens, Shah Rukh surely enjoyed KKR’s victory over Royal Challengers Bangalore (RCB). He felt bad as well when his team lost its last game against Chennai Super Kings (CSK).

Despite riding a roller coaster of emotions, Shah Rukh’s presence in the stand always attracts attention. Especially when he is accompanied by his cute little son — AbRam. On April 8, the father-son duo hogged the limelight even though SRK’s team clinched the victory.

The Sweetest Pic Of All @iamsrk #AbRam During #KKRvRCB Game pic.twitter.com/iVktPfwQ3O

Him conversing with his daughter Suhana was also became the focal point of the match.

And the most important thing, the victory lap: 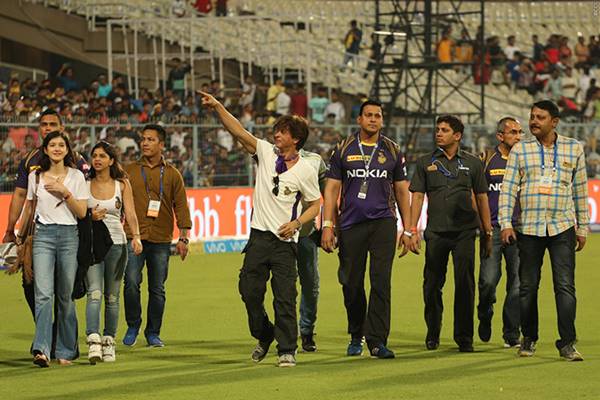 Though the RCB lost the game, Shah Rukh’s gesture made all Virat Kohli fans happy. Afterall, it’s a totally different environment off the field.

@AnushkaSharma Your first hero with the hero of your life @imVkohli @iamsrk pic.twitter.com/DQ5k2j9pMr

And the last one from the MA Chidambaram Stadium where he looked disappointed as his team lost their second game in this tournament. Despite putting an excellent performance by the batsmen, KKR couldn’t stop CSK taking the game home. However, he was generous enough to meet MS Dhoni’s wife Sakshi and clicked a selfie with Ziva.

It may have been #KKRvCSK on the field, but not in the stands!

I think we have enough reasons to explain to Shahid Afridi why the IPL is the biggest and most loved T20 league in the world.

Well, after a playing a game away from home, KKR will welcome Sunrisers Hyderabad at the Edens on April 14.