While Sunrisers Hyderabad (SRH) have mastered the art of defending low scores in the Indian Premier League (IPL) 2018, Manish Pandey has evolved as a trustworthy fielder at the boundary line. He has already stunned fans with a few acrobatic catches in this tournament so far. The way he saved a six today against Rajasthan Royals (RR) has put him on the top of the list of phenomenal fielders of this season.

The incident happened during the 19th over of the second innings when RR were chasing a total of 152 runs and were almost close to the victory. Debutant Mahipal Lomror was on strike and he opted to hit a biggie to speedster Siddharth Kaul towards the long-off area. Pandey followed the trajectory of the ball and jumped to grab it. At the same time, he was aware that he was about to cross the boundary line. So he simply threw the ball away and saved 4 runs in this entire episode. 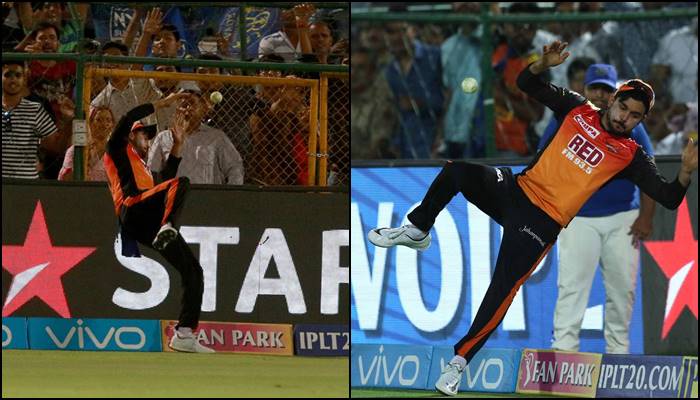 Manish Pandey saving a six during the IPL match no 28/ Photo: BCCI

Right after Pandey’s supernatural save, Lomror was caught behind by Wriddhiman Saha who also took a flying catch to dismiss the debutant.

Earlier, SRH had won the toss and opted to bat first. Though they put a low total of 151 runs on the board, it was greater than their previous two totals. And like in those games, the Hyderabadi bowling unit turned out to be successful to defend the total. RR fell short by 11 runs and lost yet another game in this tournament.