India’s fielding coach R Sridhar recently compared Indian all-rounder Hardik Pandya with a gangster from one of the British television crime drama series ‘Peaky Blinders’ when Hardik posted a picture on his Instagram account. Dressed in a black suit and a hat, Pandya looked dapper in the picture.

R Sridhar, who is currently in Nagpur with the Indian team for the second Test match against Sri Lanka, posted a comment on Pandya’s picture saying:

ALSO READ: Moeen Ali on his controversial dismissal: ‘If I was bowling I wanted that out’ — WATCH

‘Peaky Blinders’ is a British television crime drama based on the exploits of the Peaky Blinders gang during the aftermath of World War I. 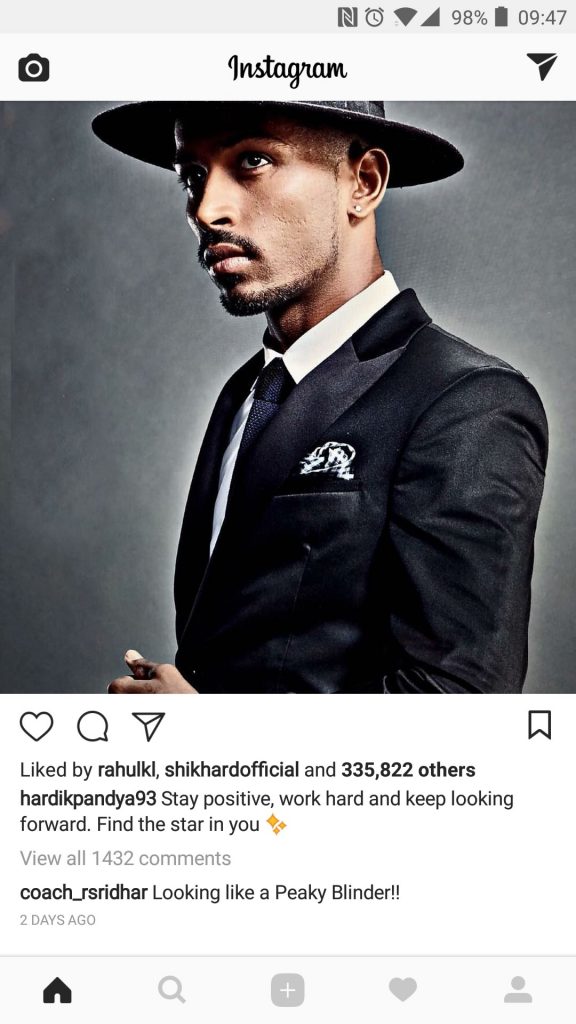 Earlier, Board of Control for Cricket in India (BCCI) rested Hardik Pandya for Sri Lanka series. BCCI in its statement released on November 10, said:

The All-India Senior Selection Committee in consultation with the Indian team management has decided to rest all-rounder Hardik Pandya for the upcoming Paytm Test series against Sri Lanka.

While explaining their decision, BCCI added,

Considering Pandya’s heavy recent workload, the decision was made to negate any possibility of a major injury concern. Pandya will undergo a period of strength at conditioning at the National Cricket Academy in Bengaluru.

Pandya made his debut in Test cricket during India tour of Sri Lanka in August 2017.

ALSO READ: Virat Kohli will not be a part of the remainder of the SL series. Ajinkya Rahane to become interim captain

Team India are scheduled to play 3 Test matches, 3 One Day Internationals (ODIs) and as much T20Is against Sri Lanka.