Young Kuldeep Yadav has been India’s biggest weapon in South Africa. The Uttar Pradesh-born cricketer did what no other Indian spinner would have ever dared to dream of. Imagine India winning an ODI series in South Africa on the back of a wrist-spinner! How many would have given this thought a realistic chance?

Kuldeep Yadav has already bagged 16 wickets in 5 One Day Internationals played so far in the 6-match series. Virat Kohli’s team India has created history by winning their first ever bilateral series abroad and Kuldeep Yadav is on the verge of making his own world record

Kuldeep Yadav needs 3 wickets to go past Indian greats Javagal Srinath, Amit Mishra to the record. He has the chance to become the highest wicket-taker in a bilateral series in ODI history. 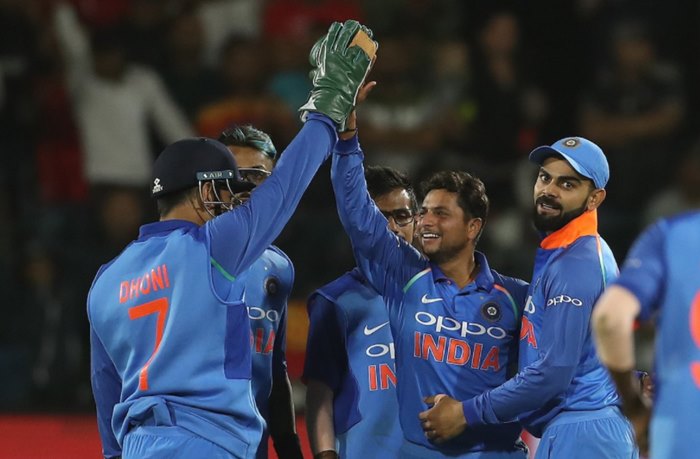 The coveted list is headed by the two Indians with 18 wickets apiece. They are followed by Patrick Patterson and Craig Mathews (17 each). Kuldeep is tied with Rashid Khan. This could be a massive boost for the youngster who is still very young in the circuit and has a long way to go.

ALSO READ: Were you aware of Virat Kohli, Rohit Sharma’s THIS unwanted stat in ODI cricket?

Meanwhile, India has defeated South Africa 4-1, with a solitary ODI still to be played. Virat Kohli has made it clear, he will press for a win the last ODI to be played at Centurion. Virat Kohli, the Indian captain has also been having a dream run, with two centuries already in the ODI series so far.

That also makes him the frontrunner to bag the Man of the Series along with Kuldeep Yadav.