2141 runs for Karnataka in the 2017-18 domestic season, 5 centuries and a triple ton to his name. What else does the 27-year-old from Karnataka need to make the cut to the national team? Well, it was not all hunky-dory at the outset, as he cobbled up a mere 31 runs in first three innings that included a pair. But soon things changed for the domestic veteran when he started getting hundreds on a canter, that too daddy hundreds. A 304* was followed by 176, 23, 90, 133*, 173, 134, 78 in eight innings.

These are numbers one would die for. In between all of this, Mayank Agarwal pipped Shreyas Iyer’s tally of 1,947 runs which the Mumbai batsman had gathered in the 2015-16 season, to become the highest run-scorer in an Indian domestic season.

In the coveted Syed Mushtaq Ali Trophy, he played 9 matches and scored 258 runs at an astounding strike-rate of 145, he also emerged as the second highest run-getter of the tournament. It seemed he had hit a purple patch, but he did not stop there. 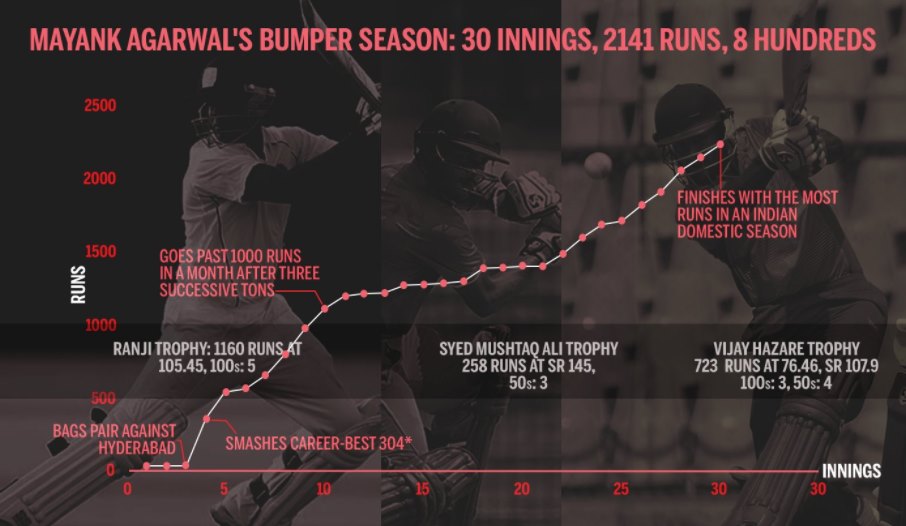 In the Vijay Hazare Trophy, he slammed 3 centuries and also had 7 knocks in excess of 80 to lead his side to the finals. He has also smashed a 94 in the final against Saurashtra. It also made him the first batsman to score 700+ runs in a List A series/tournament. Sachin Tendulkar’s 673 runs in the CWC 2003 is the previous highest by an Indian in a List A tourney.

Kings XI Punjab spotted talent and promise in the cricketer and got him onboard for IPL 2018 for Rs 1 Cr. That brings us to the moot question, as to why he is not catching the eye of the BCCI? He has been around for some time, he also has loads of IPL experience. These questions are being raised now than ever before because the Indian team for the upcoming Nidahas Trophy has been picked. Seniors like Virat Kohli, MS Dhoni and a few others have been rested to give Washington Sundar, Vijay Shankar and Deepak Hooda a go, but they have not picked an in-form Mayank Agarwal. Will BCCI now take stalk of him?