With just a few days to go for the eleventh edition of the Indian Premier League (IPL), all eyes are on Chennai Super Kings (CSK) who are set to make a strong comeback. The MS Dhoni-led side is back in the tournament after facing a ban of two years. CSK fans are already excited to watch their favourite team back in the contest with a new bunch of talent. Meanwhile, the skipper and his teammates gathered for a video shoot donning their new yellow jerseys after which some of them shared these team moments on their social media handles.

A video was shared by the CSK on their official Twitter handle where MS Dhoni and all other Chennai players could be seen dancing during a commercial shoot. Apart from Dhoni, the video features Suresh Raina, Ravindra Jadeja, Murali Vijay, Sardul Thakur and DJ Bravo.

The team also shared a few pictures too from the set where Dhoni was captured on camera revising his lines just before the shot.

That’s how you do last minute revisions…total focus amidst chaos! #Thala @msdhoni pic.twitter.com/sg4JY35AlS

ALSO READ: IPL 2018: 8 Players Who Could Be the Trump Card For IPL Franchises

The old squad is back together:

Earlier, Harbhajan Singh took to his Instagram handle to share his jersey. In the past decade, it has been for the first time that Bhajji will play for some other franchise in this tournament other than Mumbai Indians. he was bought by CSK for RS 2 crore in the mega-auction.

He also shared a video on his Instagram story where he could be seen dancing for a commercial along with other CSK players. (Watch the video here) 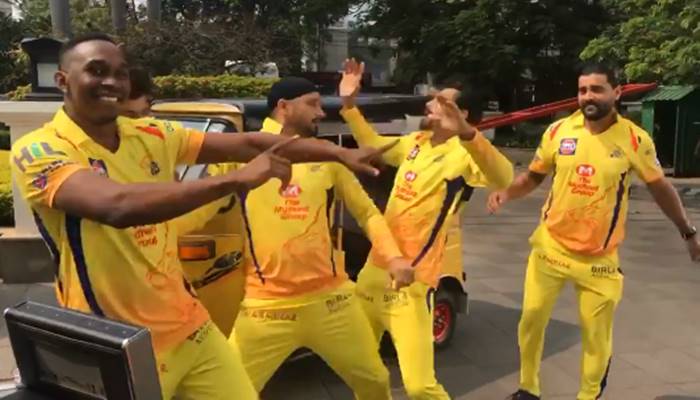 Harbhajan and others during CSK ad shoot