While cricketers from all the eight Indian Premier League (IPL) franchises are busy prepping for the forthcoming season, Indian wicketkeeper-batsman Wriddhiman Saha has set an unbelievable club-cricket record on March 24. Playing against the BNR Recreation Club at the JC Mukherjee Trophy, Saha smashed a 20-ball century for Mohun Bagan and won the game for his team in just 7 overs.

The BNR Recreation Club batted first and put a score of 151 runs on the board. Saha along with Mohun Bagan skipper Shubhmoy Das opened the innings and chased down the target in 42 balls. Saha smashed 14 sixes and 4 boundaries in his 20-ball inning to complete his ton at a strike rate of 510. Moreover, Saha smashed six sixes in the 7th over to finish the game with 13 overs to spare. 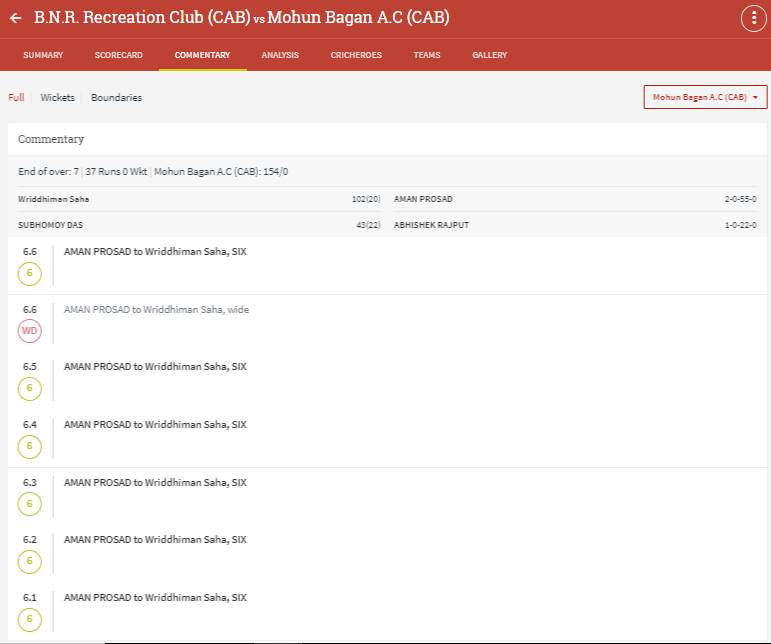 Score Card in the 7th Over

On the other hand, Das scored a 22-ball 43 which included 2 sixes and 4 boundaries. Bagan went on to win the match by 10 wickets

After this unbelievable knock from the Indian capped wicketkeeper, Mohun Bagan took to their official Twitter handle to share the picture of Saha and the snapshot of the scorecard.

Mohun Bagan chased down the score of 151 in just 7 overs beating B.N.R by 10 wickts in J.C.Mukherjee Trophy.

Saha interacted with the local media after the match and spoke about how he hoped to carry this form to the IPL as well. According to a TOI report, Saha said, “Right from the beginning, I felt hitting the ball in the middle and I went for it. Not sure of this being a record, but looking into the IPL, I tried to play different shots and it worked.”

ALSO READ: Dhoni Dancing With Harbhajan, Raina Ahead of IPL 2018 Will Make You LOL Hard

This blistering knock from Saha not only proved that he is ready to show his skills in the IPL season 11 but it’s a big plus for the Sunrisers Hyderabad who bought him in the mega-auction for an amount of Rs 4 Crore.