Baahubali 2 has hit the screens and is roaring at the Box Office worldwide. The SS Rajamouli directorial released on a record breaking number of screens and was promoted with just the right amount of buzz among the audience. The film which is a fictional period drama shows the story of revenge in all its lager than life avatar. While this film, which features Prabhas and Rana Daggubati in the lead was all anticipated for its grandeur and VFX, what also led to its mass acceptance was the curiosity that its first part — Baahubali: The Beginning had generated in the audience’s mind.

Baahubali 1 left something unanswered and people for two years have been waiting to know the why Kattappa killed Baahubali? From ‘Baahubali is still alive, Kattappa wanted to save Baahubali from a curse, to Baahubali had become arrogant and wanted to destroy Mahishmati,’ and what not? Fans had been busy churning out their own theories to solve the epic mystery. Even Rajamouli said before the release of Baahubali: The Conclusion that some fans had come very close to the real answer. But, wait till what we tell you.

So, a young man called Sushant Dahal already knew the exact answer of the million dollar question. When the entire nation was waiting for the release of Baahubali 2 to get their answers, this guy had gone to Quora and explained the entire story behind Kattappa killing Baahubali. To our surprise, his answer, that he, by the way, had written on July 18, 2015, is correct word by word.

Also read: Before Ramya Krishnan, this veteran actress was approached to play the role of Sivagami in Baahubali

Now that most fans have watched Baahubali 2 and there’s no threat to our lives for revealing the answer, here’s what this man wrote: 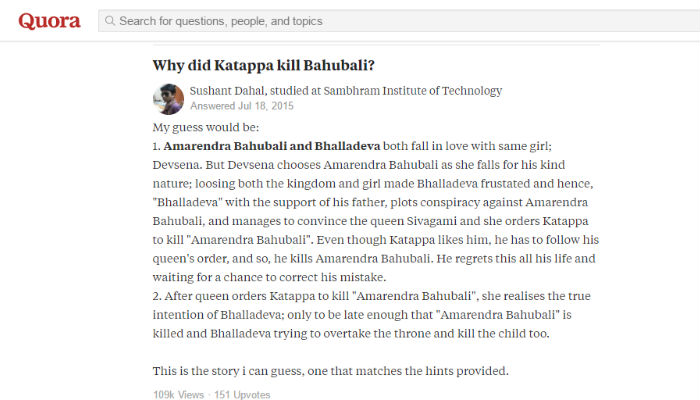 We are still numb. How can one predict something with this much of accuracy? His post has got 109 thousand views and 151 upvotes. He’s like a hidden hero. Isn’t he? Also, we tried to reach out to this man but couldn’t search for him on Facebook or at any other social media platform.

If you guys know this genius or can help searching him for us, please do. By the way, he describes himself as ‘sapiosexual’, at least that’s what his profile reads. Here’s his profile link: https://www.quora.com/profile/Sushant-Dahal