Tamil Nadu chief minister Edappadi K Palaniswami today announced that his government will launch an inquiry into the death of former chief minister J Jayalalithaa. Announcing the decision at a press meet in Chennai, he said the government will set up an inquiry commission headed by a retired judge of Madras high court to probe into the circumstances leading to Jayalalithaa’s death. He also said that her residence at Poes Garden will also be converted into a memorial.

He also said that the name of the judge will be announced soon adding that terms and tenure of the inquiry panel will soon be finalsed. He also clarified that the decision has been taken based on the requests from various quarters and the public.

The CM said, “Puratchi thalaivi Amma was hospitalized due to illness. She passed away on December 5, not responding to treatment. There were several reports in the media from various organizations and sections.”

With its latest move, the state government has met the main demands of former CM O Panneerselvam and have set the stage for the two AIADMK factions to merge. Jayalalithaa was admitted to Apollo hospital on September 22 last year after she suffered infection and acute dehydration. However, it also emerged that she was suffering from severe pulmonary infection & septicaemia. After nearly two and half months in hospital, she was readmitted into ICU on Dec 4 for cardiac arrest. Her condition was stated as critical and she was on life support. On Dec 5, the hospital announced her death

Here are seven conspiracy theories that has probably led to an investigation into Jayalalthaa’s death:

Former Tamil Nadu assembly Speaker PH Pandian raised suspicion over Jayalalithaa’s death terming it mysterious and demanding a probe into the matter. He said that Jayalalithaa was pushed and fell over on September 22 after an argument with someone at her residence at Poes Garden in Chennai.

2) Jayalalitha was under fear of being poisoned

While London based doctor Dr Richard Beale stressed that she died of cardiac arrest, Pandian had said at a press conference in February that Amma had suffered from depression and that she had shared her fear of being poisoned by someone.

A 2012 Tehelka report by Jeemon Jacob said, “Jayalalithaa found out that she was given sedatives and chemical substances that had small quantities of poison by a nurse appointed by Sasikala, and this is why she had expelled Sasikala and her family from her Poes Garden residence.”

Senior Journalist Barkha Dutt has shared an email “a staff from Apollo has gone off record and said that Jayalalithaa was given wrong drugs of diabetes before she was admitted.”

4) Own MLAs not allowed to meet

Panneerselvam has said that during the 75 days of Jayalalithaa’s treatment in Apollo , he visited the hospital every day, but was not allowed to see the then chief minister.Later in February, Pandian said none of the AIADMK leaders knew about Jayalalithaa’s health condition and what medical treatment she was receiving throughout her 75-day hospitalisation.

Also Read: ‘Had a crush on Jayalalithaa’, Markandey Katju reveals his soft side through FB post

Among others, DMK’s MK Stalin and actor Gautami expressed their concern about the mystery surrounding Amma’s death and why there was so much secrecy about her treatment. Stalin said, “I have been repeatedly saying Jayalalithaa’s treatment was shrouded in mystery. The truth will soon come out in public.” 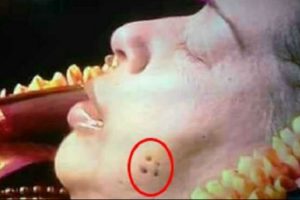 One of the photographs taken when Jayalalithaa’s body was kept for public viewing at the Rajaji Hall in Chennai went viral on social for a reason. Four dots were visible on Amma’s left cheek. Social media was abuzz with speculations about what really happened during the 75-day-long hospitalisation.