Salman Khan and Aamir Khan are two of the biggest superstars in the country. Both have worked together in cult comedy Andaaz Apna Apna and the fans are waiting to see them together on the silver screen once again. In real life, both the actors share a cordial friendship and have been spotted together at various public events.

They both also enjoy a huge fan following. In terms of Box Office, their films continue to shatter records one after another. In fact, Aamir Khan’s wrestling biopic turned out to be the highest-grossing non-English film ever. On the contrary, Salman’s latest release Tubelight failed to weave magic at the ticket counters. The 51-year-old actor who witnessed a turnaround in his career with 2009 hit Wanted, has enjoyed a dream run with his films shattering one record after another. If you compare the Box Office performance, both Aamir and Salman are neck-to-neck.

Here are the 10 highest grossing films of both the actors. The figures have been compiled from popular website Box Office India. In the battle of two Khans, it is Aamir who has emerged as the table-topper at the domestic Box Office. Dangal is the highest grossing film with collections worth around Rs 500 crore, followed by 2014 blockbuster PK that raked in an estimated Rs 448.74 crore. 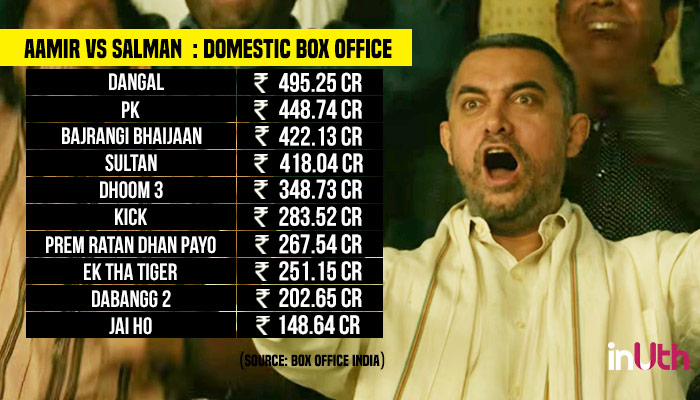 Aamir has ruled the international Box Office with Dangal raking in Rs 1,840 crore overseas, followed by PK earning Rs 578.24 crore. The wrestling biopic of Mahavir Singh Phogat has taken the Chinese Box Office by storm and has received an overwhelming applause there. However, it will be foolish to say that Salman’s stardom is waning beyond the Indian shores. In the past few years, the actor has clearly edged past Shah Rukh Khan, the third member of Khan triumvirate. Bhaijaan’s films are immensely popular in the UK, the USA, and Pakistan. 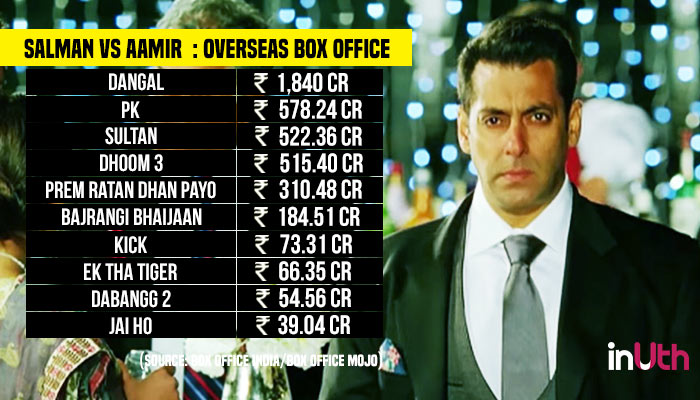 Known for doing only one film a year, Aamir ensures that the solo release does much more business than the other films. On the other hand, Salman has become more selective in terms of his roles in recent years. It is another fact that Tubelight did not do well as per his stature. But, it is foolhardy to judge him on the basis of one film. Outside India, Sultan fared better than Dhoom 3 that speaks volumes about Salman’s pan-India appeal.

Who is your favourite star, Salman or Aamir?