The majority of Hindus, especially those living in the eastern part of India, Durga puja mark the celebration of victory of goddess Durga over demon king Mahishasura. The festivities begin with Mahalaya, which starts a week before puja where people celebrate the annihilation of the asura king by the goddess. But for some, this festival is about remembering the martyred king.

In Sakhuapani, a remote village about 170 kms away from Jharkhand’s capital Ranchi, live over 2ooo people belonging to the Asuras tribe, a particularly vulnerable adivasi community. The members of these tribes live in pockets not just in Jharkhand but also in West Bengal and Bihar. As per the 2011 Census, there are 22,459 Asuras in Jharkhand, and 4,129 in Bihar. 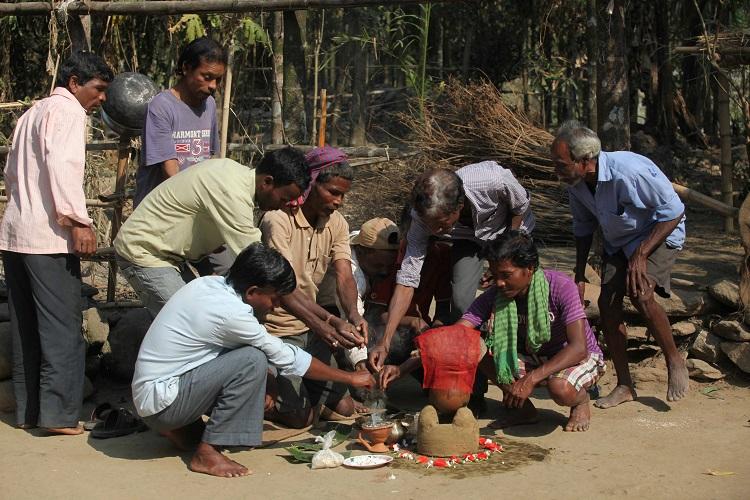 Asur puja being performed by the male members of the Asur Community in Corann tea estate at Jalpaiguri in Darjeeling District on Sunday. Express photo by Subham Dutta. 03.03.16

The myth of Mahishasura

The Asuras claim to be descendants of Mahishasura, the buffalo-demon king who was killed by Goddess Durga after a battle lasting nine nights. What is celebrated as Durga Puja in mainstream in Hinduism is observed as ‘Mahishasura Dasain’ among Asuras who mourn the martyrdom of their beloved king for nine days. They observe Asur puja twice a year, once during the month of Phagun (March-April) and once during Dusshera.

The mainstream Hindu interpretation says that Mahishasura, an asura (demon) was always at war with the devas (gods). Since he was given a boon that no male could defeat him, the devas led by Indra couldn’t match up to him. The devas called upon Durga, the warrior form of Goddess Parvati, who fought Mahishasura and killed him. In scriptures and mythological narratives, she is depicted as a goddess riding a lion armed with weapons in each of her 10 hand slaying Mahishasura. But as per the Adivasi narrative, Mahishasura was killed by deceit by the devas who couldn’t defeat him. 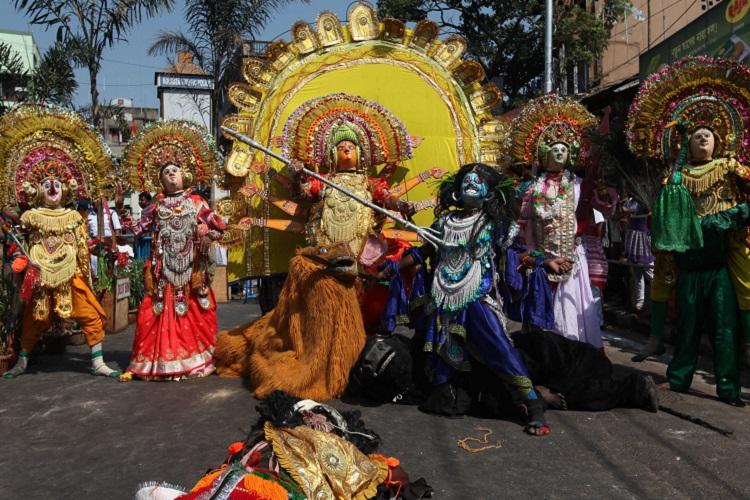 Chhau artists from Purulia during their performance of Chhau dance depiction of Durga killing Mahishasura (demon) in a Kolkata street before the immersion of Durga idols. Sunday was the last day of immersion in Kolkata. Express photo by partha paul-kolkata-281012

Why is Mahishasura important?

The celebration of Mahishasura isn’t only about alternative mythology.  Dalit activists call it a symbol of contemporary Bahujan movement in India. The adivasis call Durga Puja a ‘savarna interpretation of the folklore’. Many also consider the war between devas and asuras as the war between Aryans and Dravidians.

Why Mahishasura gained prominence in the recent years?

In 2011, the All India Backward Students’ Forum in Jawaharlal Nehru University organised its first Mahishasur Shahadat Diwas. The event was basically a discussion forum to bring together Dalits, Adivasis and other marginalised groups which do not belong to the mainstream Hinduism. In 2016, the diwas came under controversy after becoming a topic of parliamentary debate, after the then Union Human Resource Development minister Smriti Irani read out excerpts out from the pamphlet – ‘Mahishasura Martyrdom Day’ – in response to allegations of high-handedness against JNU and Hyderabad Central University students.