Nearly five out of 10 Indians paid bribes to get their tasks done in past one year, an online survey carried out by a corruption watchdog has revealed.

According to the survey carried out by Transparency International India in 11 states of the country, 45 per cent respondents admitted to paying bribes at least once in last year for completion of their tasks, a report in Times of India says.

Last year, the findings of a similar survey were 43 per cent. 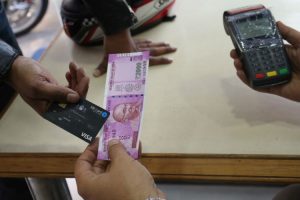 Under the study, a sample size of 34,696 respondents were asked about their views on corruption and whether it’s increased or decreased.

Most of the bribes, according to the survey, were paid at the local level public institutions.

When it comes to central government departments, only 9 per cent of respondents admitted paying bribes for getting their tasks completed.

Perception of increase in corruption was recorded highest from West Bengal and Madhya Pradesh. In capital Delhi, three out of ten residents believed that corruption had gone up, the TOI report added.