‘Urdu ko hum ek roz mita denge jahaan se . . . ye baat bhi kambakht ne Urdu mein kahi thi.’ For decades poets, musicians and artists are lamenting how Urdu, once a popular language of the street, is vanishing away from popular discourse. To revive the hues and the expressions of this language, Sanjiv Saraf founded Rekhta foundation which is now hugely popular among poets and Urdu enthusiasts. The Foundation launched the website rekhta.org in 2013, which has since organically grown to become the largest online repository of Urdu poetry in the world. Aiming to create the much-required awareness and appreciation of a language born and evolved in the Indian sub-continent, the foundation organized the first Jashn-e-Rekhta festival in 2015. What happened next was amicable.

“The interest of the people hasn’t increased; it has just exploded. This was something I didn’t expect. The last two editions have been very heartwarming for the festival that celebrates Urdu; we call it Urdu but for all practical purposes, it’s Hindustani,” said Sanjiv Saraf.

In its third year, Jashn-e-Rekhta presented the spectators with many interesting panels, most of them originally included in the printed program. The celebrity artists weren’t as ubiquitous as the previous two editions and yet the footfall seemed as crazy.

An inaugural episode with Gulzar and Ustad Amjad Ali Khan saw a packed stage lawn named Diwan-e-Khaas. A huge crowd gathered outside the lawn and cheered along with those who had a view of the poet and the musician. There was rapturous applause as duo delighted everyone with their melodies and graceful short conversation.

The festival’s first panel took place the following morning with Gulzar in conversation with screenwriter Javed Siddiqui in a session titled Hum Sooratgar Kucch Khaawabon Ke. He spoke about the poetry of Mir Taqi Mir and Faiz Ahmad Faiz among others. “Poetry is not about personal pain or tragedy. It should resonate the society’s grief. A social consciousness should be reflected in your poetry,” he said. Gulzar advised a young generation of writers to ‘self-evaluate’ their work. “Ghalib used to edit his own poems and often reject the works he did not like. It is important for poets and writers today to know their shortcomings, and be able to edit their own works as well as reject them if they are not up to the mark,” he iterated.  It was followed by a book launch ceremony of Silence, which is an English translation of renowned Urdu writer Joginder Paul’s abstruse novelette Nadid. 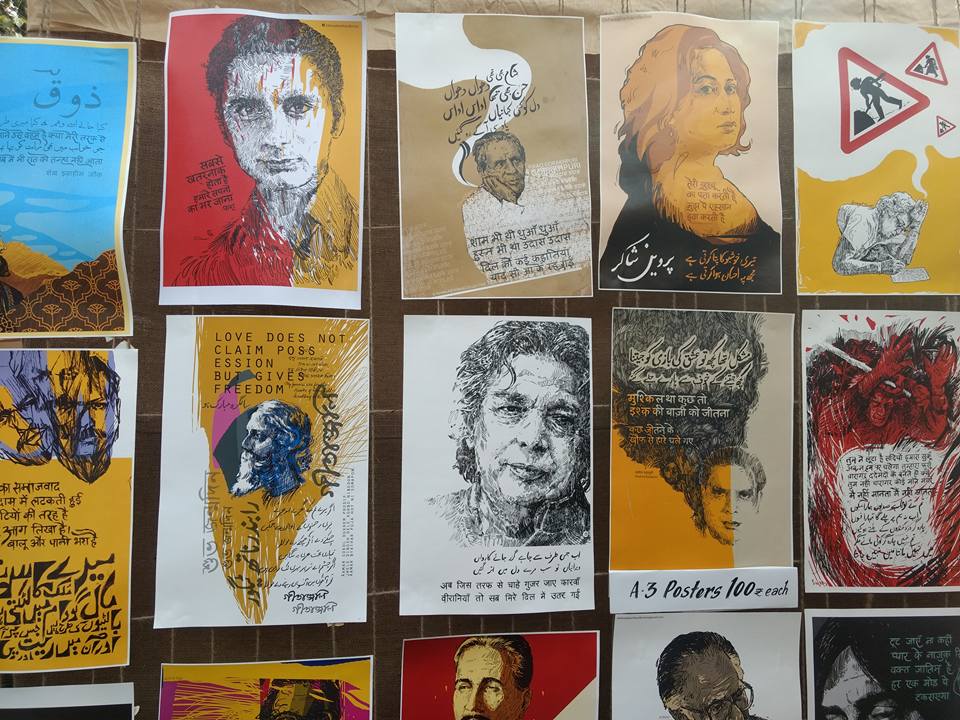 The luminaries from the world of cinema, Prem Chopra, Sharmila Tagore and Saurabh Shukla, whose presence at the festival added to the fervor, spoke about the dying ascendency of Urdu in cinema and theatre in two separate panels, Jab Filmein Urdu Bolti Thi and Theatre Ke Bhoole Hue Rang.  The first day also saw another discussion session on Premchand and his writings, a dastangoi session by Aamir Ahmed and Himanshu Rai. 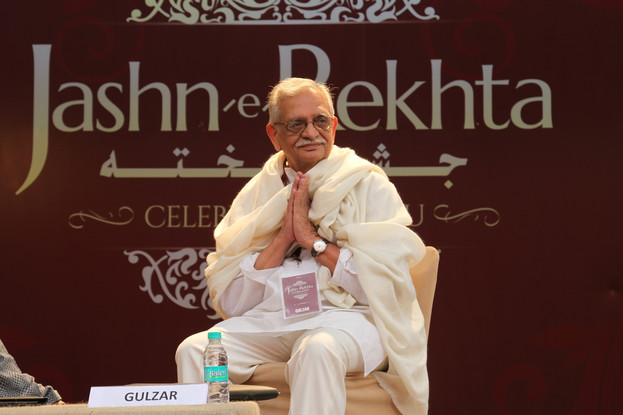 The last day began with a session by Prasoon Joshi who developed his likeness for Urdu at an early age of fifteen when he started reading the likes of Manto and Chughtai. “Shayari is about articulating one’s own experiences in life, rather than reiterating someone else’s words,” he said. He spoke about the kind of songs that are made in Bollywood in present times. “With the new kind of music coming in, the major purpose of any song is to entertain and dance. They are mostly made to promote a movie and that is why the inherent poetry is lost,” he said. “Although there are always exceptions, I believe there should be a little more space for songs which have a meaning to them. Even if I write any such song, I try to say something through the lyrics,” he further added.

The much-anticipated speaker of the day was AAP member and Hindi poet, Kumar Vishwas who spoke at a session titled Main Jo Hoon Jaun Eliya. Reciting some of Eliya’s famous lines, Vishwas lauded his style of writing saying that Eliya continues to resonate with younger generations because of his “bold and fearless” poetry. He expressed his desire to read “read Sahir, Faiz or Eliya in the Parliament someday”. He confessed of his difficulty in trying to create a balance between poetry and politics. He ended the session on a high note by singing his famous verses, Koi Deewana Kehta Hai.

Another interesting session of the day which recollected the times when the Urdu language was a part of the courtroom culture was moderated Saif Mahmood in discussion with Chief Justice of India T.S. Thakur, Justice Aftab Alam, Salman Khurshid and Tahir Mahmood.

“A lawyer has to know his judge intellectually. And in case the judge is T.S Thakur, he is simple to impress. Just recite some couplet by Ghalib,” admitted former Chief Justice of India T.S Thakur, who is fluent in Urdu. Justice Aftab Alam too confessed that, when he was a judge at the Patna High Court, he wrote couplets by famous poets like Faiz Ahmed Faiz and Allama Iqbal while pretending to take notes when bored in the courtroom. “If one checks the Patna court’s notepads, they will find Urdu poems,” he said. Both accepted that Urdu, while not in use commonly, was not dying and needed no revival either.

As always, the happenings off stage caught more media attention than the ones on the stage. A young group of over thirty attendees at the event thrashed and abused controversial author and critic, Tarek Fatah. He was asked to leave the venue by the crowd who were shouting slogans like Modi ka kutta, Tarek Fatah and Death to Tarek Fatah and hurling abuses at him. “This was an attack planned by the Congress youth wing and people backing Left ideology,” he said after the incident to a leading daily. “The Rekhta organizers were conspicuous by their absence, leaving me with the impression that it was they who had sent the Muslim mob to attack me and that it was at their request that the police acted against me, threatening me repeatedly,” he added.

The last session of the three-day event witnessed actor and singer Annu Kapoor who spoke briefly about his early stint with the Urdu theatre and then sang a few of his melodies. The concluding ceremony saw Punjabi singer Hans Raj Hans who swayed the audience back and forth in his sufiyana andaaz.