1944. France occupied. Hitler’s men, having already navigated their way into France, are sparing no one. French resistance is solidifying its grip and young guns are ready to collectively share their conscience and arms. Conscience? We shall see. Jean Peal Sartre, the most influential proponent of existentialism, sets his play Men without Shadows in this French backdrop. Sartre’s philosophy of existentialism on meaninglessness and identity can be gauged easily from the title of this play itself. Men without Shadows, men without identities, men inundated in crisis and meaninglessness. This postwar existential classic strongly depicts the effects of war on people and how they are defined having lived the terror. 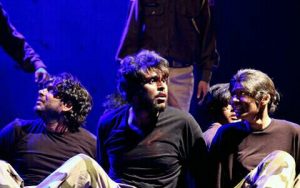 This seminal play has been adapted by Amit Sah in the backdrop of a restive Kashmir in India. It is about five Indian soldiers (French in 1946 original), who have been captured by the enemy forces and are ready for an interrogation. They must hide their identity. In other words, they must be without identity. What price will they have to pay to conceal their secret? Blood, body or being? The play becomes even more brutal and harsh with a fellow woman who is struggling with her emotions, who shares a genuine tenderness and love with the other four, more towards her lover and her younger brother – the latter’s fate catapulting the brutality and inhumane repercussions of war to the point of wretched emotions. 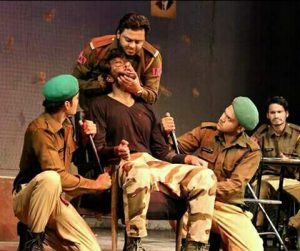 Directed brilliantly and staged at the Shri Ram Centre Auditorium, the play of emotions intermingles with the near-perfect lights and sounds. The terror of war can be sensed when brilliantly edited music and light effects add to the ongoing physicality on stage. Emotions are heightened to the core and leave the audience chilling down to their spine. 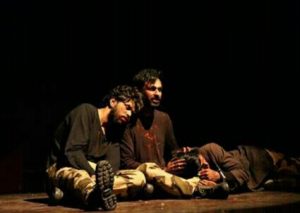 The casting is intricate and sensible. It appears that actors have gone deep into their characters and are enacting a postwar like situation without realizing the presence of an audience. Effortless acting, perfect timing and a sense of an ending, all add to the sheer honesty of Jean’s politics of war portrayal. 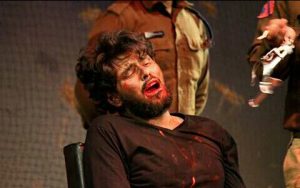