In the world where women are assumed to not be taking any interest in sports, Mayanti Langer is confidently discussing every ‘silly point’ of cricket. Currently, anchoring Champions Trophy, Mayanti is hogging all the limelight with her confident stroke. In case, you don’t know, she grew up playing football and has hosted various international sports events, including cricket. Yes, she is not just the face of IPL or CT2017. She has hosted several sports tournament including 2010 FIFA World Cup and Commonwealth Games of 2010.

While she is doing her work perfectly, there are a few people who have problems with her dressing style or may be with her 5-inch heels. Seriously?

Mayanti is doing her work in a formal set-up where they discuss cricket. She looks perfectly fine carrying those short dresses and her heels. So, this article by BuzzFeed says, “In a room full of men in standard formal-wear – suits and dress shoes – Langer was perched atop 5-inch heels, in a top that hugged her like a corset and an asymmetrical skirt that clung just as tight. She stood in attention, as though mid-march past because the outfit left her no choice. The getup was ridiculous enough that she trended on Twitter the same evening as an India-Pakistan match” 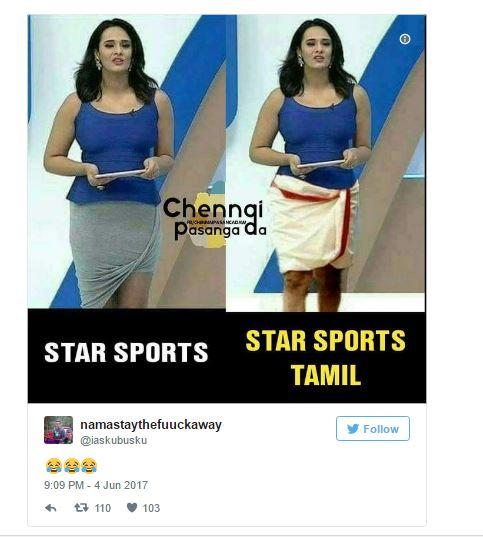 Though it is somebody’s opinion (and it’s fine to have one), we certainly feel there are few points that don’t make sense at all. First of all, men were in standard formal-wear – suits and dress shoes and so was Mayanti. Wearing a western formal dress, she made all her points with much confidence. The outfit wasn’t ridiculous at all, but yes mentality of a few Twitterati certainly was. Well, even you would agree that Twitter has become a networking site where people just love to troll. This is not the first time when Mayanti was trolled, last year she was blamed for her husband Stuart Binny’s poor performance. After all, Indian cricket fans have been known to be ‘unbelievably sexist’ and we’ve seen it happen even to Anushka Sharma an ample number of times.

“That clung just as tight”: Did we ask her if she was comfortable or not? Now, the article goes on to say: “This isn’t the first time Langer has been subject to a wardrobe decision that makes no sense. She’s worn short dresses in cold weather and heels on the soft ground. Her discomfort is a repeat offense, and indefensible.”

Phrases like ‘repeat offense’ and ‘indefensible’ show Mayanti as some sort of criminal who just ran over a street-dweller. It is difficult to justify the vehemence of these statements by the writer.

Well, our Bollywood actresses dance in Switzerland. You want a proof:

Going back to the point: When Mayanti wears a short dress in cold weather with heels on, she focuses on her job instead of seeing if she is standing on five-inches heels. 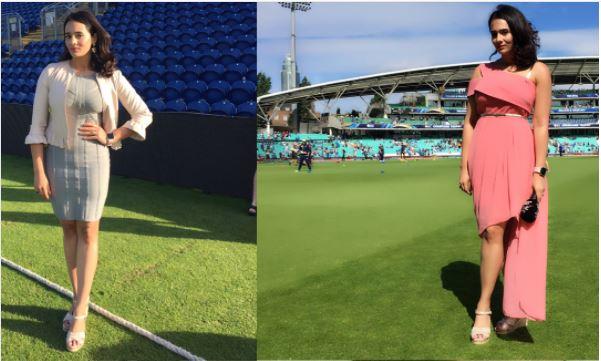 And this is not something we are saying. InUth contacted Mayanti to know her views on the article. Here is what she said:

“I am more concerned about pulling off a live show with all the limitations of an on-site production than wearing five-inch heels. My priority is my content.”

Why do we need to speak for people who are keen on doing their job? We just ignore appreciating them and make comments on something they don’t even care about. We should be proud seeing Indian discussing sports at international level. This doesn’t happen every day when an Indian female TV anchor reaches the heights where she is appreciated. After Mandira Bedi, here is another one. Even Mandira faced a lot of criticism for her sartorial sense.

If she would have felt uncomfortable wearing these short dresses, she would have switched to shorts (Oops! sorry you might felt the sexiness there) or trousers (oh! you might find it tight or fitted) or pyjamas (or you will say they are not good for TVs) or must have trolled her for that. too.

Are you asking her to wear saree or suits (But sexiness will still be there…no?)

What ‘brunts of fashion and sexiness’ is the author talking about here?

We just want to tell you — few women are comfortable wearing sports shoes, while some prefer heels and some are cool with their slippers (Lemme know if you want examples).

The author even proposed a few purchases for Mayanti —

A pair of comfortable shoes for her to wear — Lady, she is fine wearing those heels, else she would have switched to shoes. After all, she is anchoring a sporting event, why would anybody mind if she wears sports shoes and flaunt them on TV (she might get sponsors too)

A chair that she can actually sit in (not a high chair, Star Sports) — ‘While the men she talks to’ too sit on the same chair. It is the format. Why girls need extra importance..ahem..equality..ahem…

And clothes that would allow her to… wait for it… breathe — She is alive, breathing and working hard all day. She chooses what to wear and so she is able to do her work perfectly.

Just be proud of a lady who chose to do ‘hatke‘ job for herself. And stop being pados waali aunty, who thinks she knows what is better for you!