Just hours after the Indian Air Force carried out a non-military pre-emptive operation on February 26, Burger Singh sent out SMSs celebrating the surgical strike near Balakot. In the promotional message, the Gurugram-based food startup offers a 20% discount on their menu if ordered from their site. The seemingly insensitive coupon code that they provide was “FPAKAGAIN”, along with #SorryNotSorry. 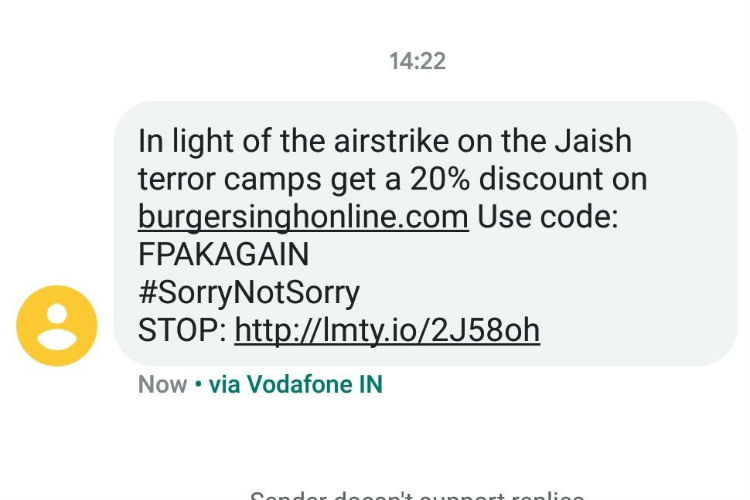 They also put out a clip of Pulp Fiction on their social media handles, marketing their coupon code.

However, taking such advantage of the sensitive situation to promote their brand seems to have backfired. Many on social media are calling the food joint for being “insensitive and irresponsible” for creating a marketing gimmick out of the heightened tension between India and Pakistan:

@ZomatoIN @Zomato @zomatocare how do you support @BurgerSinghs and put them on your platform with such xenophobic, hate promoting brands? Shame on you burger Singh. Your social media team should be fired. @Kabirjeet using loss of lives to sell burgers? #Zomato #burgersingh pic.twitter.com/kmJ2RNtnD4

A thin line in marketing you should never cross.There is a difference between being quirky and being insensitive about an issue that concerns 1.2B people. You should be #Sorry for not being #SoSorry @BurgerSinghs. Never ordering from you guys in this life.

Are you insane? What kind of marketing is this?

So irresponsible and insensitive on your part to make light of national issues as a marketing gimmick to sell more burgers. In very poor taste (literally too, I hear) #boycottburgersingh

If only your sensibilities were as good as your Dilli 6 fries.

This is absolutely disgusting. Promoting loss of lives for what? Selling burgers?

Shame on you, this is just plain insensitive. When India gets bombed, will you give coupons then also?

How insensitive of you to take advantage of a violent situation for profits. Try to be solemn and matured.

Launched in November 2014, this is not the first time the quick-service restaurant (QSR) chain thought to promote themselves on the back of military operations. In 2016, they offered a similar discount on their orders when India conducted surgical strikes in response to the Uri attack. Their message read:

“In light of the surgical strike by India defence forces on terrorist camps (POK), we offer 20 per cent off on all orders on burgersinghonline.com. Coupon code:fpak20”

Though Burger Singh did not respond to InUth individually, a Reddit user posted their email response on a thread. According to the QSR,

“…we are not the aggressors in this unfortunate scenario and India as a nation is morally obliged to take care of it’s (sic) people. The Indian Armed Forces are fulfilling their obligation. We support our troops and will continue to celebrate India’s non-military preemptive action against terror and it’ll be hard to convince us otherwise.”

In the early hours of February 26, the Indian Air Force struck a major Jaish-e-Mohammad (JeM) terror camp near Balakot using Mirage-2000 aircraft, according to Foreign Ministry secretary Vijay Gokhale. In a press conference, Gokhale also said that ‘a large number of JeM terrorists, trainers, and senior commanders’ were killed.