If you’re ordering food right now, there’s a decent chance that there’s biryani lying in your food cart. According to Swiggy, an online food delivery platform, there was a 681% increase in biryani orders in 2018, as compared to 2017. Biryani has replaced pizza and burgers as the go-to comfort food with 2018 witnessing over 9 million orders — that is, one biryani ordered every 3.5 seconds.

While pizza, burgers and cakes remained the most-searched food items last year, chicken biryani was the most ordered dish during festivals, lunches and late-night slots across the country. Biryanis are often offered in bulk at workplaces and events, Swiggy states.

Though the origins of the dish are disputed, it is widely believed that the dish originated in Persia and came to India during the Mughal empire. However, according to Sagar Kochhar, CMO of the parent company of Behrouz—one of India’s largest online biryani brand—cloud kitchens and quick-service restaurants (QSRs) have started differing offering a wide variety of biryani to suit regional tastes. He told IANS,

“Biryani is also region-specific and a Bengali will prefer Kolkata biryani and a Tamilian will go for Chennai-type biryani. We are devising new marketing strategies to attract millennials via Facebook and Instagram, etc.” 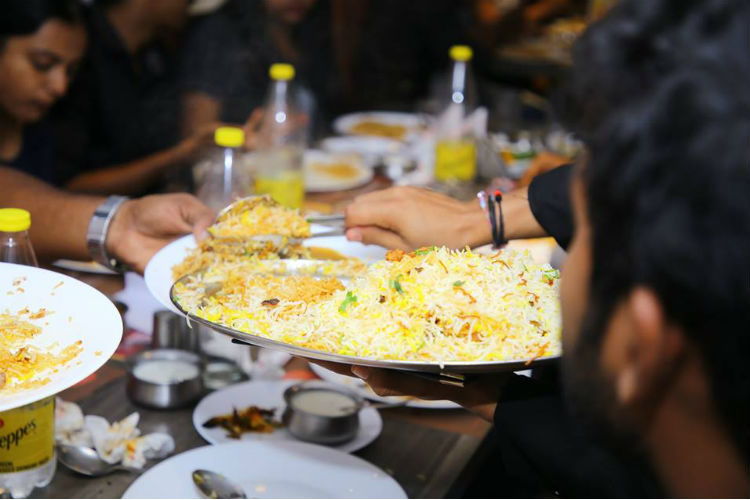 Sandeep Anand, CMO of Zomato, also told IANS that biryani orders have increased more than 10 times on the platform since 2017.

“Chicken biryani has been the most-ordered dish on our platform for two straight years. The numbers are destined to only grow further with more and more biryani outlets opening-up with interesting innovations to the dish.”

Recently, Paradise Food Court, a Hyderabad-based food chain, entered the Limca Book of Records for most biryanis served in a year — with 70,44,289 servings in 2017.

October 28 was also declared as ‘National Biryani Day’ in 2018 as Swiggy received the highest number of orders for the dish that day.