Sunny Leone is the most sought after Bollywood actresses in the industry. The gorgeous girl enjoys a huge fan following and her Instagram account showcases an amount of love Sunny Leone’s fans shower on her. The actress undoubtedly has the charm to rock in any kind of outfit. Be it the traditional ethnic wear or the western outfits, Sunny has the unmatched charm to pull off any outfit or dress. In the Facebook poll conducted, we asked people to tell which kind of wear suits Sunny the most- traditional wear or western wear? The results were simply amazing.

Last seen in Raees, the gorgeous Sunny Leone recently rocked the traditional pink and off white-coloured lehenga. The golden embroidery and floral pattern added to the overall look. Styled by Hintendra Kapoopara, the actress looked elegant and graceful.  In another event, Sunny flaunted her chic avatar. She looked uber cool in Seema Khan boho chic denim jacket. The actress was styled by famous designer Kavita Lakhani. We decided to put these two avatars of Sunny Leone against each other to see what does the audience prefer. The amounts of votes that poured in indicated a clear winner. While one of the dresses received 97 votes, other won 253 votes.

Before we tell you which one was a clear winner, these are the two dresses that were picked up.

Here is the result that made all the difference: 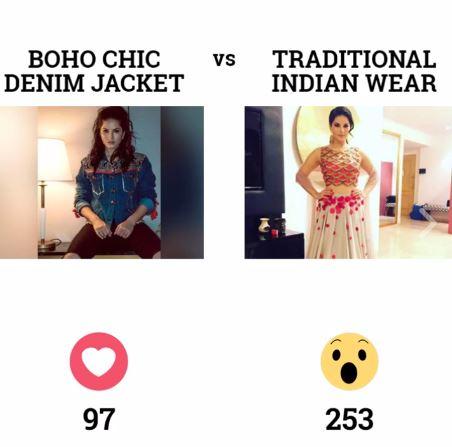 On the professional front, Sunny Leone will be seen next opposite Arbaaz Khan in the romantic thriller Teraa Intezaar. This is the very first time that both the actors will share the screen space and hence fans are waiting for the film eagerly. The movie has already been shot.