Priyanka Chopra is grabbing all the headlines for her latest photoshoot which she got done for a leading popular magazine. Now, we know that there have been quite a many times that the actress rocked the photoshoots with her sizzling avatar. This time also she pulled off her cool avatar with utmost grace and panache. Priyanka started her career with modeling and the actress later went on to make a big name for herself in the industry. She is currently portraying the role of Alex Parrish in Quantico series.

Coming back to her latest photoshoot, PeeCee can be seen is gracing the cover shot of latest issue of the popular magazine. It seems that the actress will also talk about feminism, success, and family in the May-June issue of the leading magazine. Dressed in a black coloured gown, the actress is looking alluring on the cover of the magazine.

The Instagram post of the magazine read, “Introducing our May/June cover star, @priyankachopra! The @abcquantico star opens up to us about her new role in Baywatch out May 25th, success, family and feminism. Plus, Miami’s top options for health and beauty, a-list summer destinations & more in our highly coveted health & beauty issue!”

Here is a look at her past photoshoots and the fun she had on the sets. 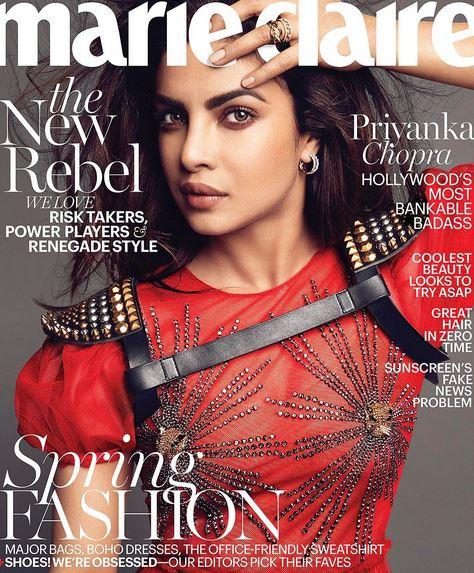 Dressed in a red dress, Priyanka looks smoking hot. Her expression and smokey eyes are doing all the talking.  Here is the first look of Priyanka Chopra’s photoshoot for the popular magazine

The new trailer of her thriller film Baywatch has been released wherein Priyanka will be seen portraying the role of a vamp. The movie also stars The Rock Dwayne Johnson, Zac Effron, and Alexandra Daddario. Baywatch will hit the theaters on 25 May 2017.