Bollywood veteran actor Anupam Kher recently posted a picture on his Instagram account that took all of us by surprise. His determination to stay fit has reached an another level. A few years ago, the actor was bitten by the bug of fitness. He realized how fitness plays a pivotal role in everyone’s life and since then, the actor has never looked back. He has raised the bar of his fitness regime and his transformation is a perfect example of that.

The actor has been vocal about his fitness goals in the past. A couple of months ago, the actor took to his Twitter account to share the excitement of losing 14 kg within a year’s time. The actor also emphasized the importance of Salman Khan, Akshay Kumar and Anil Kapoor who have been a source of inspiration when it comes to his fitness.  Apart from that he has also thanked his trainer for the immense amount of hard work he has put in.

The Shaukeen star is leaving no stone unturned to get into a perfect shape. The actor is tremendously  working out hard. He does not strive for a six pack abs or a chiseled body but he wants to stay fit. Be it his long walks or his rigorous routine of lifting weights, the veteran actor has been following a disciplined routine. After tremendous hard work for one and a half year, the actor’s physical transformation seems believable and convincing. 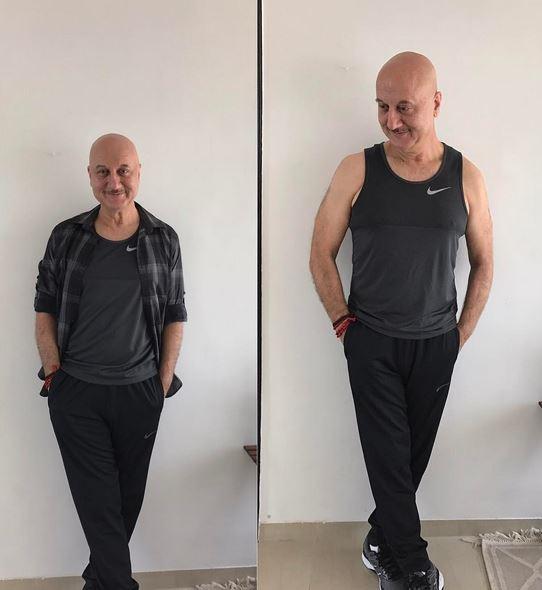 Anupam Kher has been lately sharing a lot of pictures on his official social media accounts. And let us tell you that his transformation has left all of us speechless. His dedication has motivated us every bit and this picture has definitely left us speechless. We will definitely get to see his new side in Taapsee Pannu and Akshay Kumar’s Naam Shabaana. In the meantime, do watch some of his fitness videos:

Kudos to Mr Kher for telling us nothing is impossible!