Sridevi’s daughters Jhanvi Kapoor and Khushi Kapoor are our favourite star kids these days. From their regular Instagram updates to airport looks, we just love stalking the two upcoming Bollywood divas. Jhanvi has turned 20 today and we are eager to see her on-screen soon. Although dad Boney Kapoor confirmed the reports of his daughter Jhanvi’s Bollywood debut, however, mommy Sridevi never said anything. If reports are to be believed, Jhanvi will make her debut with Hindi remake of Marathi blockbuster Sairat — a musical romantic drama, and we are sure she will nail it. She has got a right style and attitude. She knows how to look graceful all the time. On Jhanvi’s 20th birthday, her younger sister Khushi has already wished with a sweet post on Instagram. Check it out: 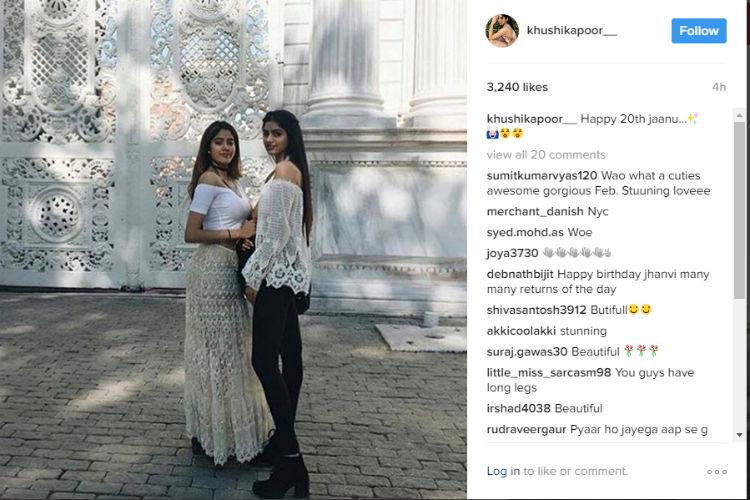 While we don’t know about Jhanvi’s Bollywood career, we know she is one superb fashionista. After her cousin Sonam Kapoor, people are surely expecting some great experiments from her too. 2017 is going to a be a year of star kids making their Bollywood debut. Jhanvi Kapoor has already started with her style game. Recently, she was seen wearing Manish Malhotra lehenga. Her Rajasthani royalty with statement jewellery was making her look fabulous.  It’s not just these lehengas, she looks no less than a princess even in her casual attires.  From gowns, lehengas to casuals, here are different looks of Jhanvi Kapoor.