The girl-next-door Shraddha Kapoor garners a huge fan following. She is one of the most sought after actresses for youngsters. Shraddha Kapoor has done several photoshoots in the past but her latest one for a popular magazine is classy. Half Girlfriend star Shraddha Kapoor shared a picture on her social media account wherein she flaunted her chic avatar with such a swag.

The actress can be seen wearing a printed monochrome skirt. The bubbly girl looks all smiling and her funky and carefree attitude is quite evident. In a series of photos, the actress set the temperature soaring by displaying her hot avatar. Shraddha Kapoor looks beautiful in a skirt. Interestingly, her styling in the movie Half Girlfriend closely resonates with the magazine cover. The street smart and casual look has been on display. The actress wrote on her Instagram account, “@feminaindia @rohanshrestha @shraddha.naik @amitthakur_hair @Fendi.” 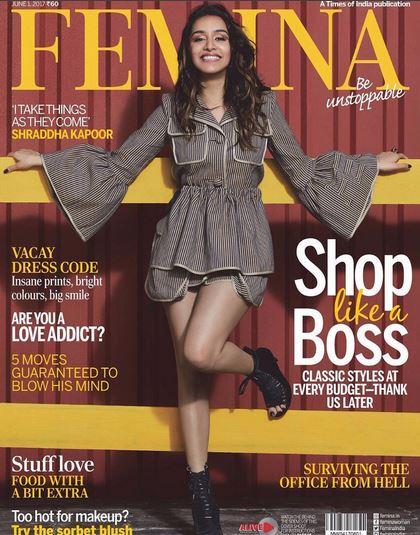 The makeup was done by none other than celebrity makeup stylist Shraddha Naik. The volume and striking hairstyle was maintained by popular stylist Amit Thakur. Here are a few more pictures of Shraddha Kapoor from the same photoshoot:

In the past also, both Shraddha Kapoor and Arjun Kapoor did a smoking hot photoshoot. Their sizzling chemistry was a highlight. The steamy jodi is set to amuse fans in the film. Both were high on coolness quotient.

It’s a sizzling summer!_ _#ArjunKapoor and #ShraddhaKapoor heat it up on our latest cover._ _Double tap if you love their chemistry!

On the work front, her film Half Girlfriend is slated to hit the theatres on Friday. The film is an adaption of the novelist Chetan Bhagat’s book Half Girlfiend. It has Arjun Kapoor in the lead role as well. Shraddha plays the character of Riya Somani whereas Arjun portrays the role of Madhav Jha who falls in love with Riya Somani. Directed by Mohit Suri, the movie is a soul clinching movie.
For interesting entertainment and lifestyle videos from InUth, follow us on Youtube.com/InUthdotcom