Aishwarya Rai Bachchan has been gracing the red carpet of Cannes for last 15 years. She made her debut at the film festival in 2002 and is still dazzling it with her appearances. At the 70th edition of Cannes Film Festival, Aishwarya Rai Bachchan will walk the red carpet on May 19 and May 20. And we are already excited to know what is she going to wear this time. Since Cannes is just a couple of days away, we bring you all her looks. Aishwarya’s appearance at the Cannes has remained the combination of hits and misses. Well, you can tell us which one is your favourite Aishwarya Rai Cannes Film Festival look. 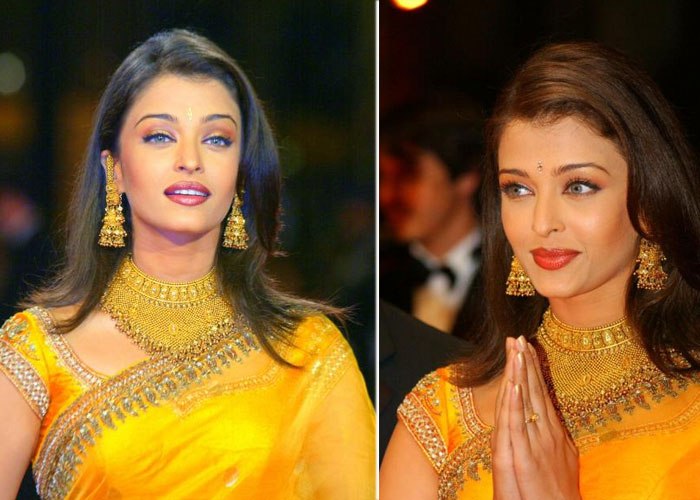 For her debut at Cannes, she chose to wear a golden Neeta Lulla sari with loads of jewellery. Though she looked fine, she over-do with the jewellary. 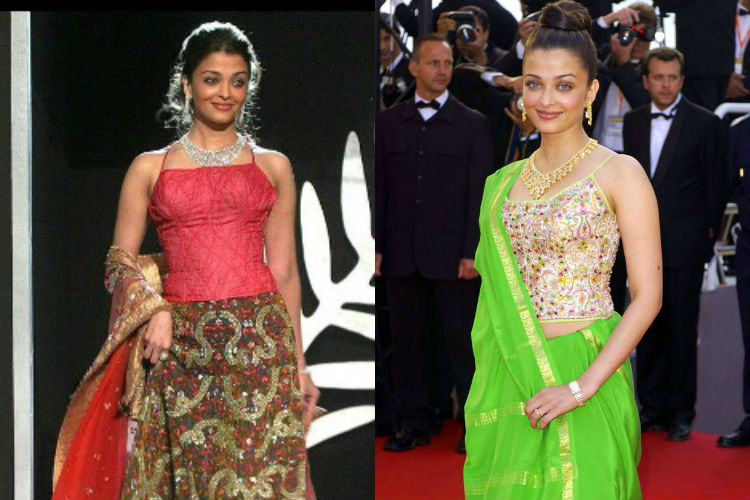 Her second appearance at Cannes didn’t go well and turned into a disaster. She wore a neon green Neeta Lulla sari with her hair tied in a bun followed by a shimmering pink dress with diamonds and unkempt hair. The outfits didn’t go well with the fashion police.

ALSO READ: Deepika Padukone’s Cannes presence has to wait as her airport look is high on fashion quotient [PHOTOS] 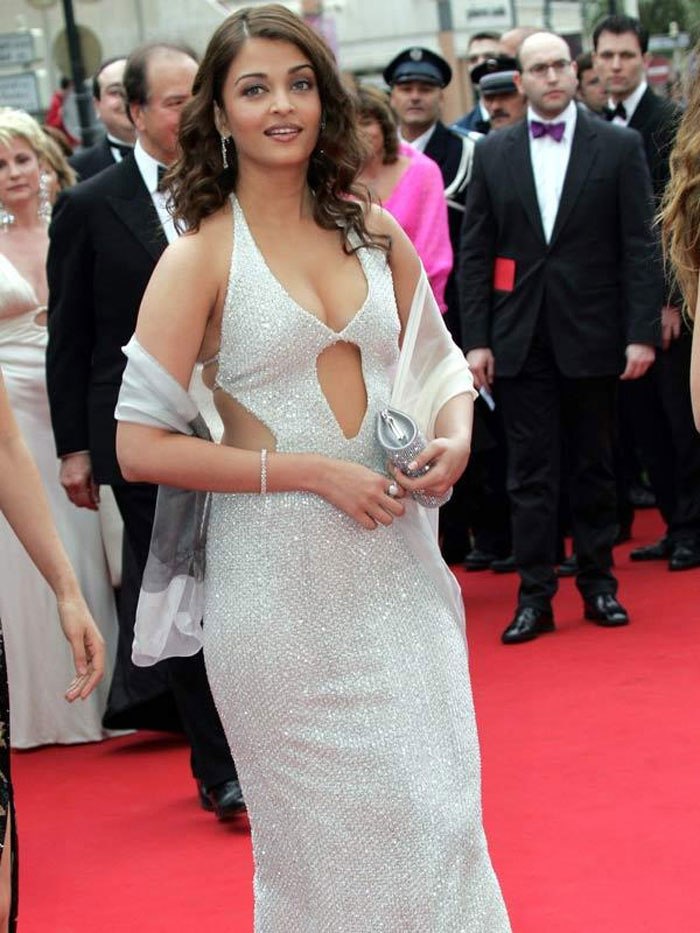 Finally in 2004, Aishwarya ditched her desi looks and wore the sexy Neeta Lulla gown. Unfortunately, the gown becomes one of her most criticised dresses. From gown to clutch to jewellery, everything just didn’t match perfectly. 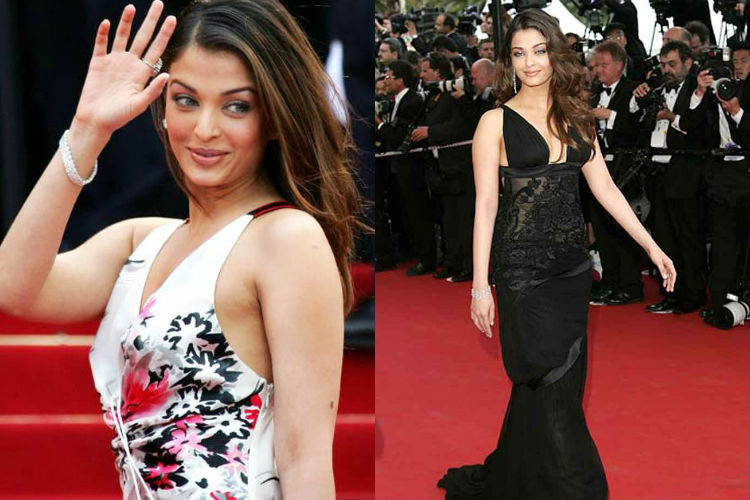 2005 brought some changes for Aishwarya. She chose to wear printed dress by Giorgio Armani and finally looked gorgeous. She followed her gorgeousness with a black Gucci gown which had a plunging neck. The perfectly fitted gown made her look ravishing. 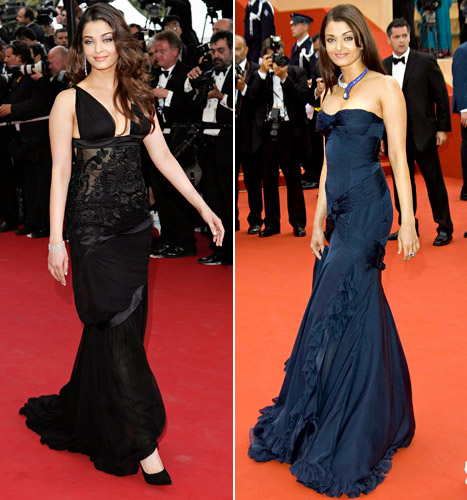 In 2006, Aishwarya Rai wore a navy blue strapless gown. And her snake like neck-piece was going perfectly with the dress. While the blue dress won a lot of hearts, the black gown she wore post that didn’t go well. 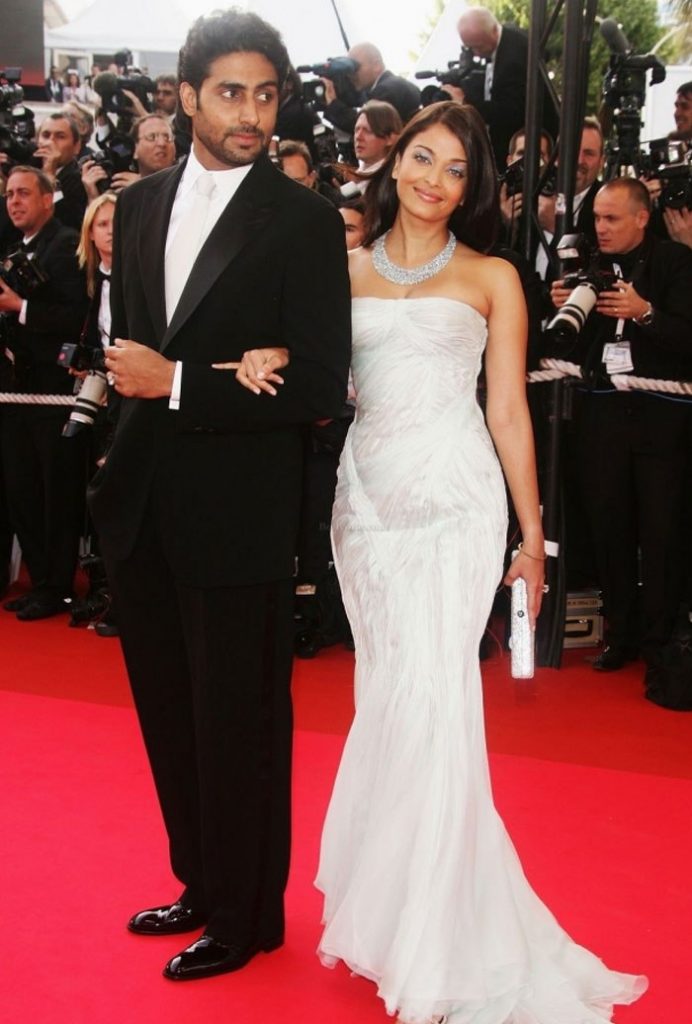 Aishwarya got married in 2007 and this time she went to the festival with husband Abhishek Bachchan. As all eyes were on the couple, Aish wore a white strapless ruched gown, Abhishek went for a black suit. We must say they were looking fabulous. 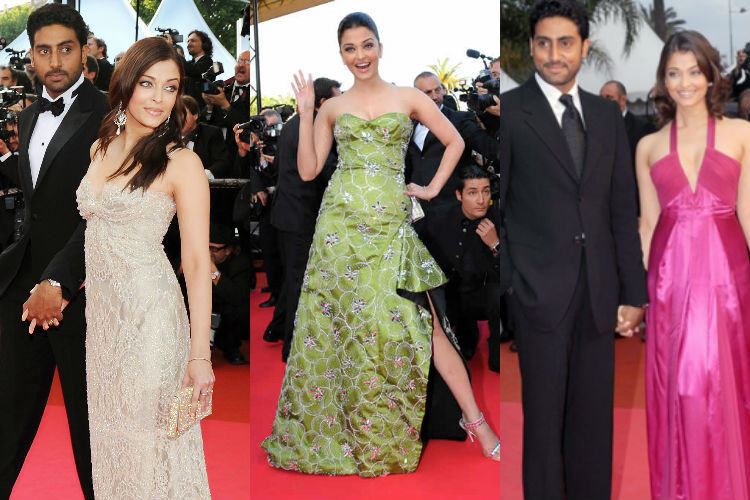 This was the year of mixed reviews and dresses. She started with a golden gown which followed with green one and then pink halter. 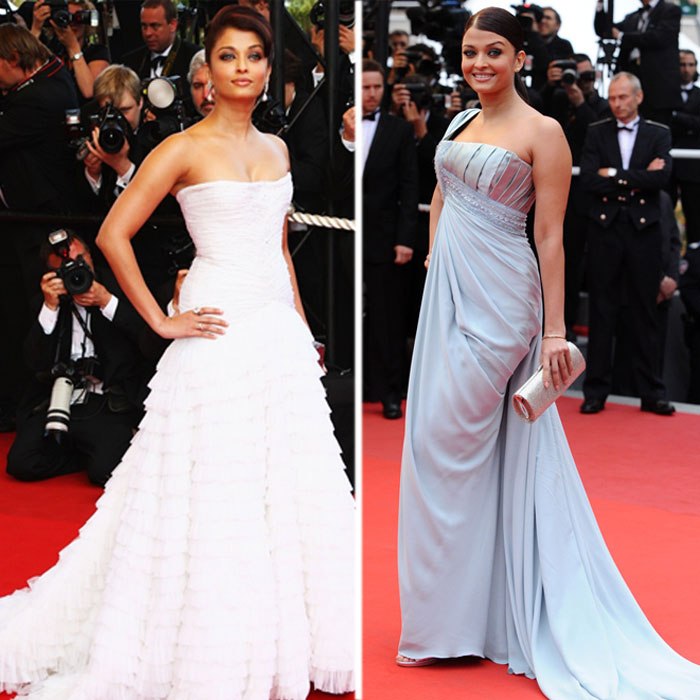 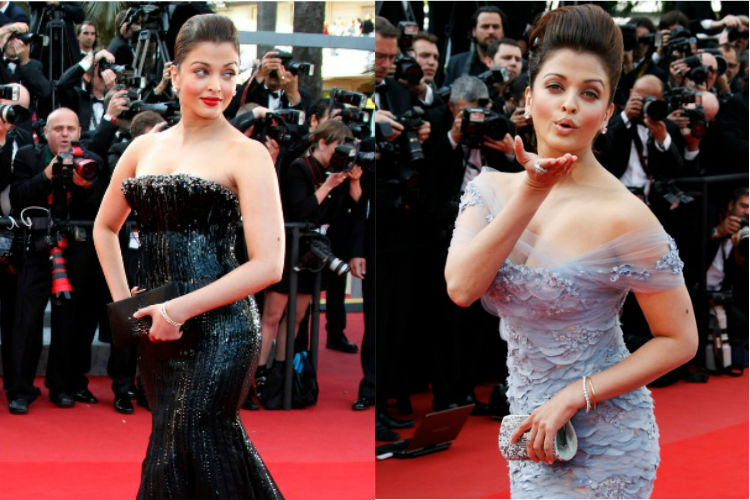 Aishwarya’s most powder blue, fish scale tiered, mermaid gown was from the house of Elie Saab. She looked gorgeous in the gown. In the same year, she also wore Giorgio Armani Prive black evening gown. This was the year when she rocked the red carpet with her looks. 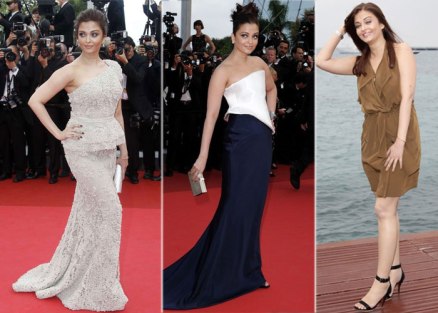 In 2011, she gave us two amazing looks. Aishwarya Rai looked stunning in an Elie Saab one-shoulder embroidered gown. Even a geometric Armani Prive dress went well. She even wore a brown dress and looked quite elegant. 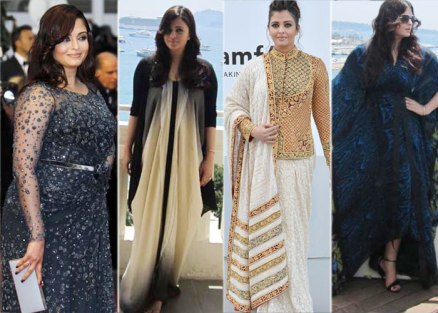 Post the delivery of her baby, this was Aishwarya’s first look. She wore Elie Saab’s embellished midnight blue gown and looked beautiful. Her second look was even more magnificent as she wore a white embroidered Abu-Jani and Sandeep Khosla saree with jacket blouse. 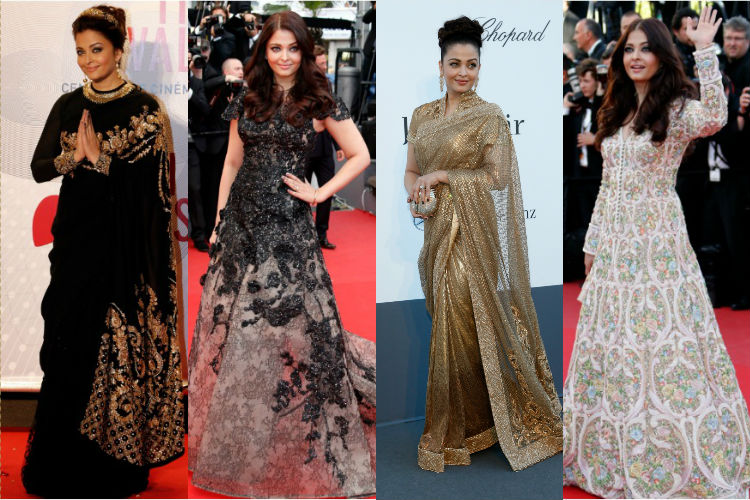 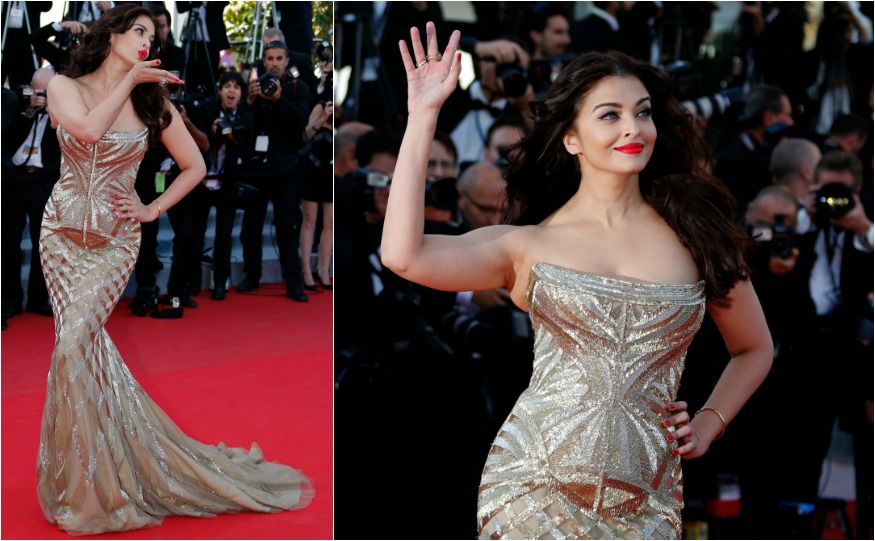 This year, she chose to wear strapless, gold gown by Cavalli and this was her best look. The second Cavalli number was as beautiful as the first one. Ivory embellished gown was stunning too. 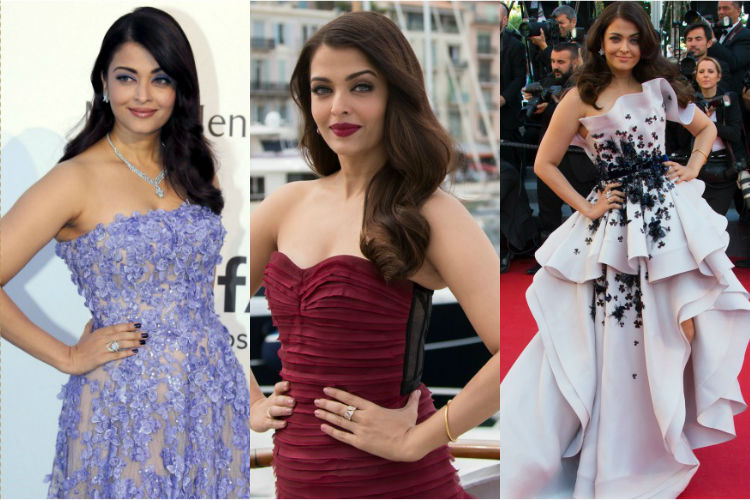 In 2015, she tried several looks. She wore white Ralph and Russo couture gown and then went for a maroon strapless outfit by Oscar de la Renta. 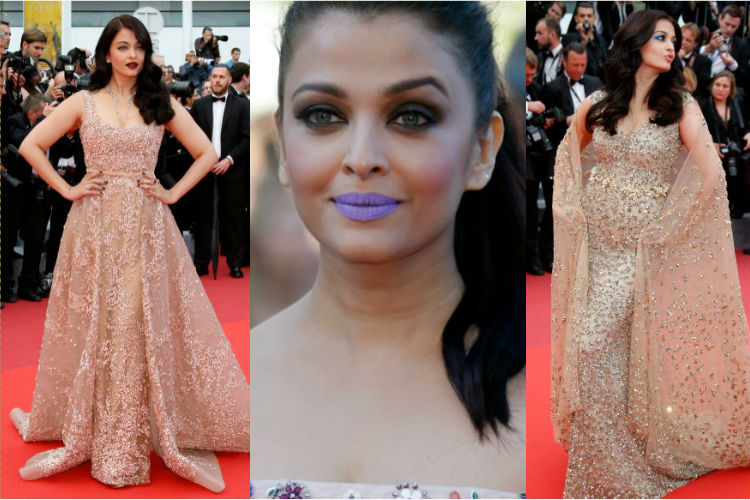 Last year, Aishwarya Rai shocked people with her dash of purple on her lips. Though her gown which was from the house of Rami Kadi beautiful, her lips grabbed all the attention.