Move over Deepika Padukone as the queen of Cannes, Aishwarya Rai has graced the red carpet of the Cannes Film Festival 2017. The former Miss World who has followed the popular event all these years, looked drop dead gorgeous. It would be not correct to say that this is got to be her best Cannes dress till now, as every time the beauty has outperformed her styling. This time was no different. So if Deepika Padukone, Mallika Sherawat, and Shruti Haasan made sure to sizzle on the red carpet event, Aishwarya Rai decided to give a sweet surprise to her fans.

Aishwarya Rai wore a light blue coloured gown and she looked like a Queen at the Cannes Film Festival.
Ahh! She is looking nothing less than a Disney princess. After giving us two stunning looks back to back, here she comes with a Cinderella-inspired blue gown. This off-shoulder gown has a sweetheart plunging neckline which looks stunning on her. Designed by Filipino designer Michael Cinco, the cinch at the waist on this ballroom dress is making her look like a barbie. 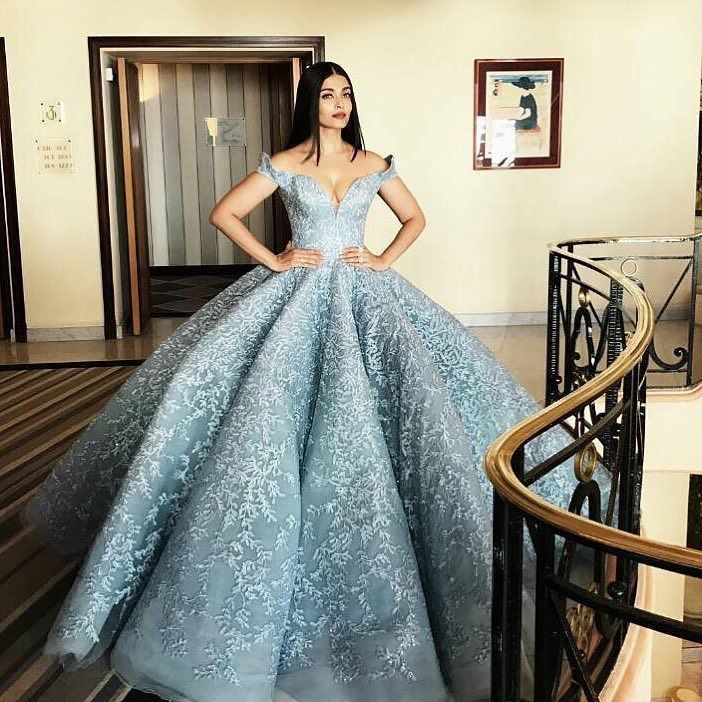 Undoubtedly, she is beauty personified. Cannes has always been a strong fashion arena for all the actresses who make their presence felt. But ain’t nobody impressed the fashion police like Aishwarya Rai who has always ensured to surprise fashion enthusiasts with her near to perfect fashion sense. The exquisite dress of Aishwarya Rai proves yet again why she is still one of the most popular leading divas of the industry. Here are a couple of pictures from her red carpet appearance:

Fans were eagerly waiting to see the red carpet look of the actress who has always been at the top of her fashion game. Never has she been a fashion disaster at the Cannes Festival and this time also she made a spectacular start to the event. Let us see what happens tomorrow when she flaunts her alluring fashion sense.

Here is what Aishwarya Rai wore since the time she was spotted at the Mumbai airport right before leaving for the French city. Accompanied by Aaradhya Bachchan, the mother-daughter duo surely created a rock-solid impression on the fans who were in complete awe of the actress. Here are a few pictures: