Amazon India Fashion Week culminated with a bang with celebrities gracing the runway throughout the day. It was not only Dia Mirza who made an appearance at the sustainable fashion show for H&M, but also Richa Chadha, Anushka Manchanda, Prateik Babbar, Angad Bedi, Sangram Singh and Nora Fatehi

The day began with the young and upcoming designers taking the centre-stage with their contemporary, quirky designs that are aimed at the young crowd. The grand finale was truly grand with Amit Aggarwal showcasing his collection alongside his mentor Tarun Tahiliani.

Here are our picks of runway looks of the day:

Designer du Shikha Grover and Vinita Adhikari showcased their signature style for the young with the collection called ‘ATTN:’. 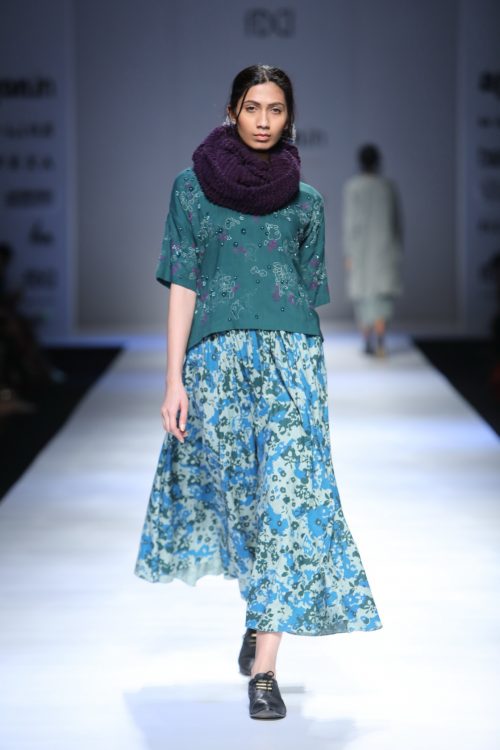 The ensembles were rich with handmade textures in various shades of foliage green. The military inspired collection used floral motifs to create a camouflage pattern for the garments.
H&M

The show was inspiring with the use of recycled shoreline plastic waste polyester called Bionic. To address the issue of cleaning up the planet, this fashion collection takes sustainability to the next level. 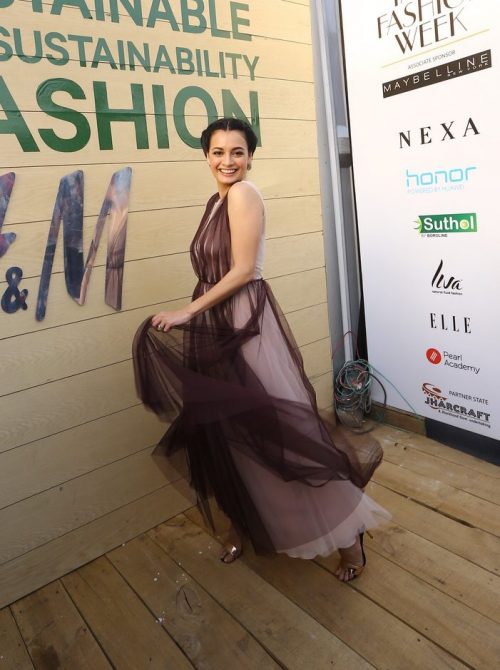 With Dia Mirza as the face of the brand for the day, the glamour quotient was high as was the style factor.

In an attempt to bring in menswear to mainstream fashion six designers including Sahil Aneja showcased a monochromatic line. 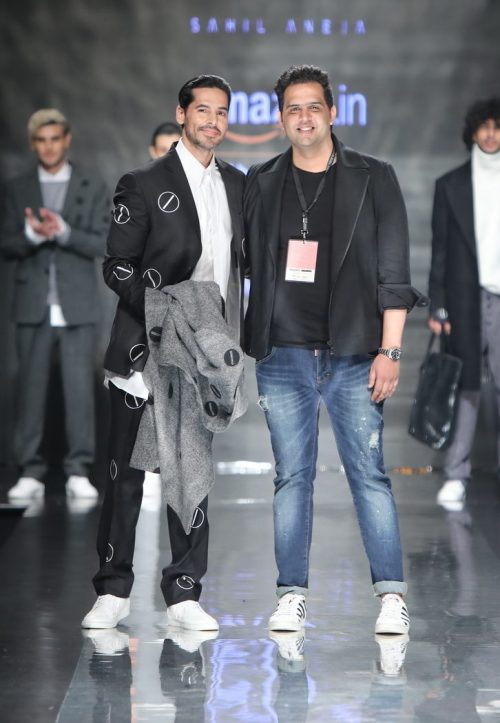 Bringing in the loudest cheer by far was super model turned actor Dino Morea who looked charming and dapper in black and white.

Kamra’s theme Yin and Yang was the perfect amalgamation for the interplay of black and white. Herringbones and checks were major elements in the garments, along with metallic embellishments on the fabric. 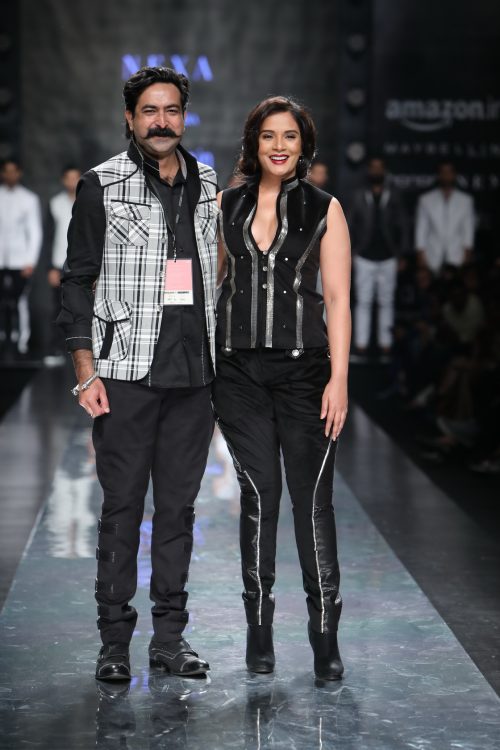 While the theme was menswear, the designer (along with the other six participating in the show) played around with androgynous clothing as well. Richa Chadha looked truly spectacular as the showstopper.

Veteran couturier Tarun Tahiliani with his protégé Amit Aggarwal presented the last show of the day under a vast set created with foliage, fallen leaves, climbers and moss with dramatic overhangs and lights. 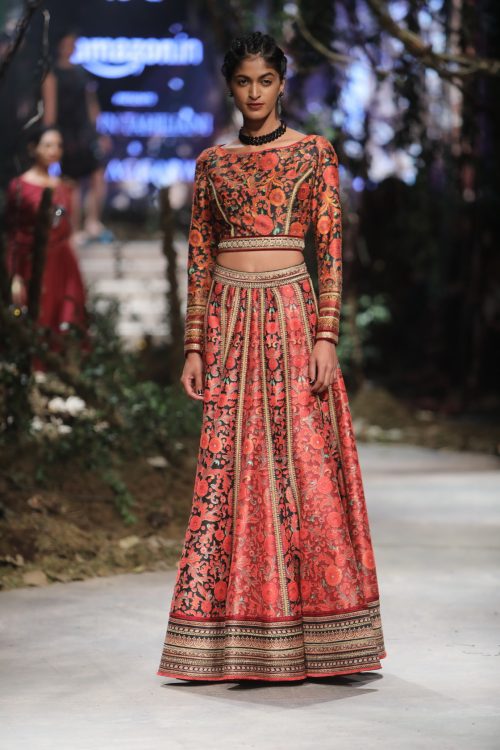 They presented separate collections in the same show which included drapes, constructed garments in soft as well as structured silhouettes juxtaposed with each other. 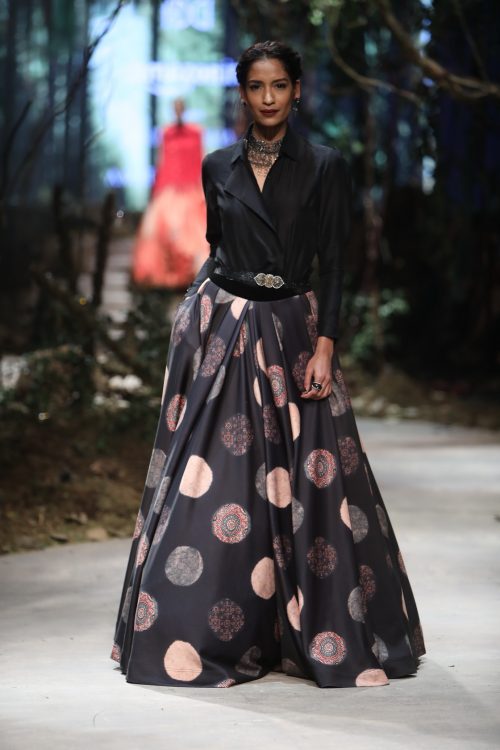 Aggarwal presented his first ever sustainable couture show using pre-owned patola sarees and Banaras brocades with a modern feel drawing out the richness of the fabrics in masterful combinations. 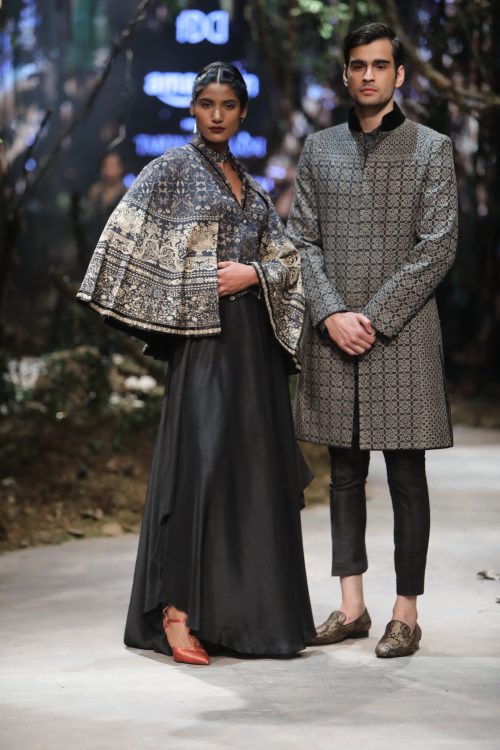 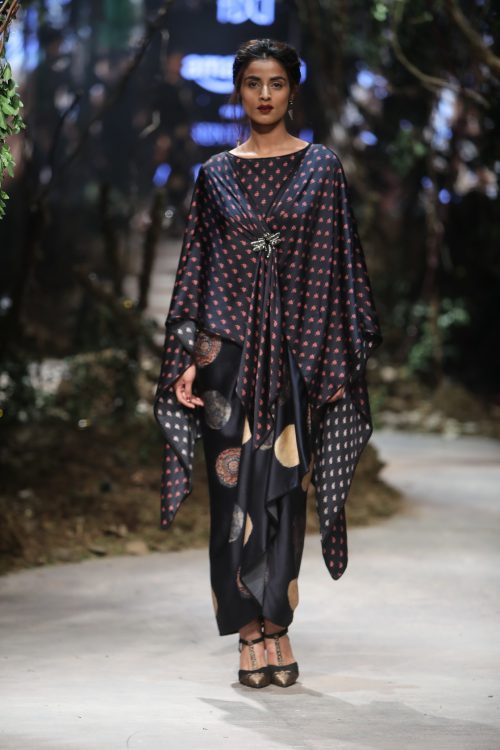 Tarun’s jewel toned collection for the upcoming fall saw a variety of traditional surface ornamentation including zardozi, Ari work, and intricate silk embroideries. He used traditional chanderis, khadi, silk, and velvet fabrics for the collection that ranged from tunics and jackets to sarees and lehengas.