Bollywood has seen a plethora of actors trying to dress up as women and entertain the audience. While some actors like Riteish Deshmukh and Aamir Khan have pulled the roles off pretty well, nobody could beat our main man Govinda. Not even the actresses.

The swag with which he’d present himself, the squeaky voices he’d mimic and the sheer savagery he’d display on the screen, whenever it came to playing a woman, nobody can do better than him, even today. We dug up and rewatched all of his old flicks and have come to the conclusion that it’s not just the actors he beat. When it comes to pulling off those saaris, skirts and salwar suits, Govind Ahuja is way better than most actresses too.

Don’t believe us? Here’s the proof:

When he dressed up as a Marathi mulgi to dupe a bunch of people. He was absolutely inimitable. Govinda’s character in Dulaara could give most Marathi mulgis a run for their money. Ae shapath.

When he dressed up as a music teacher to meet lady love Sandhya aka Raveena Tandon. The tennis balls were an intricate touch to the entire costume tbh. Sassy yet classy.

If you don’t remember Govinda as Rani sahiba in Aunty no.1, you had a pretty crappy childhood. Those saares could give Vidya Balan and her saares a tough competition.

Govinda and Shakti Kapoor dressed as old women in Raja Babu was the highlight of our childhood. You wanted him to be your grandma. Admit it. 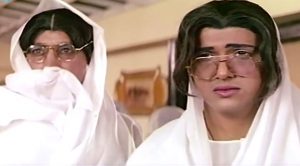 Govinda’s hot chick avatar in Coolie no. 1 is the desi version of mean girls we never knew we needed.