After rocking the box office with his energetic Dangal, Aamir Khan has decided to sizzle our screens with his latest magazine cover. Aamir, who is turning 52 this month, is the cover boy for the March edition of a popular fashion magazine. The magazine has decided to call it Aamir special as it is his birthday next week. The magazine is captioned: Born To Rule Aamir Khan!

Mr. Perfectionist is seen in long hair, beard and moustache and looking nothing less than regal. He is wearing the indigo cotton jacket and chequered monochrome jogger pants. His dress paired with monochrome oxford shoes is way too quirky. However, the vintage oval sunglasses is looking amazing. The colour combination of his attire is just too way out of our understanding. It looks the intellectual Aamir has gone too far this time. Check it out: 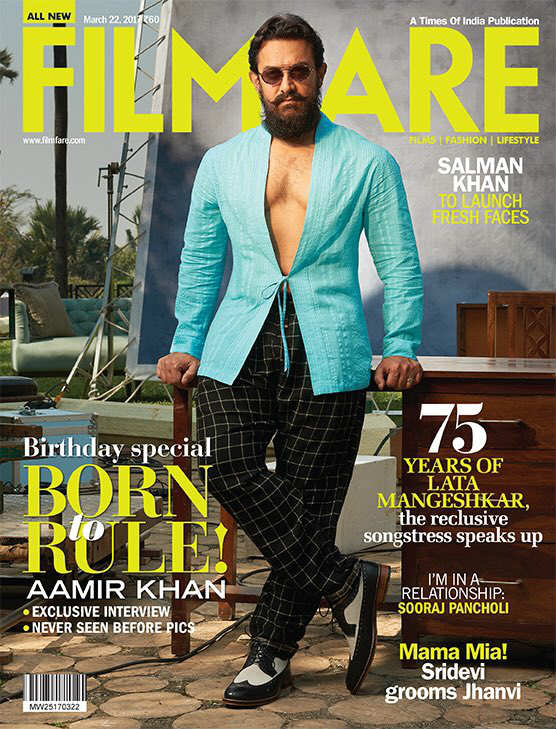 This is not the first time when Aamir graced any cover photo, however, he did one after the period of 3 years.

Currently, Aamir is basking in the glory of Dangal success, which earned over Rs 400 crore on Box Office. He played the role of Mahavir Singh Phogat, who proved that his daughters are no less than any boy. Taking it further, he recently appeared in Star Plus promo with the message of “Nayi Soch”. Aamir is seen flaunting a turban and a beard, which was earlier speculated to be his Thugs Of Hindostan look. Watch the promo here:

Also, Aamir is now all set for the release of the musical drama film, Secret Superstar. He will be essaying the role of a musician and the film is slated to release on August 4, 2017. Along with Aamir, the movie also has Zaira Wasim and Meher in lead roles.

Seen the add yet:

Man of the moment!

Here’s presenting the indomitable @aamir_khan on our special cover.