In 1963, the new owner of The Lord Clyde, a pub in the eastern English coastal town of Walmer in Kent, discovered a human skull stowed away under some disused crates and boxes in a small lumber room in the back of the building. The skull was missing its lower jaw, the few remaining teeth were loose, and it had the deep sepia hue of old age. Inserted in the eye-socket was a neatly folded slip of old paper, a handwritten note that briefly outlined the skull’s history:

‘Skull of Havildar “Alum Bheg,” 46th Regt. Bengal N. Infantry who was blown away from a gun, amongst several others of his Regt. He was a principal leader in the mutiny of 1857 &amp; of a most ruffianly disposition. He
took possession (at the head of a small party) of the road leading to the fort, to which place all the Europeans were hurrying for safety. His party surprised and killed Dr. Graham shooting him in his buggy by the side of
his daughter. His next victim was the Rev. Mr. Hunter, a missionary, who was flying with his wife and daughters in the same direction. He murdered Mr Hunter, and his wife and daughters after being brutally treated were
butchered by the road side.
Alum Bheg was about 32 years of age; 5 feet 7 inches high and by no means an ill looking native.
The skull was brought home by Captain (AR) Costello (late Capt. 7th Drag. Guards), who was on duty when Alum Bheg was executed.’

In the exuberant handwriting typical of the late nineteenth century, the note purposefully seeks to breathe life into the inanimate skull. The sparse text conjures up the image of Alum Bheg, the alleged perpetrator of such horrible deeds, by describing his age, his height, his personality (‘ruffianly disposition’), and his appearance (not ‘ill looking’).

Apart from his exotic name, the qualifying descriptor of his being a ‘native’ further emphasises his racial otherness. The text is in many ways closed and self-referential and the reader is presumed to already know and appreciate its context. There is, for instance, no indication as to why Alum Bheg would have murdered these people, apart from his innate ‘ruffianly’ character. Yet the allusions to the ‘Bengal Native Infantry’ and ‘mutiny’, would have rendered any such explanations superfluous within a British Victorian context.

As a ‘principal leader’ of the Indian Uprising of 1857, Alum Bheg is thus immediately identifiable as a deceitful conspirator, in the mould perhaps of well-known Indian rebels like Nana Sahib or the Rani of Jhansi. The description of the ambush and callous murders of innocent Europeans fleeing for their lives corresponds to the dramatic imagery associated with the event that the British referred to simply as the ‘Mutiny’. The allusion to the ‘brutal treatment’ of the women is respectably vague but nevertheless hints at a sexual attack, thus drawing upon one of the most potent tropes of the British colonial imagination.

Within the British Empire, rebellion was synonymous with the subversion of racial hierarchies and the inevitable rape and murder of white woman by dark-skinned men. The details of Alum Bheg’s alleged crimes account for much of the brief note but are prefaced by the description of his execution and the brutal technique deployed: being blown from a cannon. The text describes the threat to British rule in India, but the skull itself testifies to the defeat of that threat. It thus establishes the skull as both a relic of Indian savagery and as a trophy of colonial retribution. The skull of Alum Bheg is the ultimate proof of colonial power. 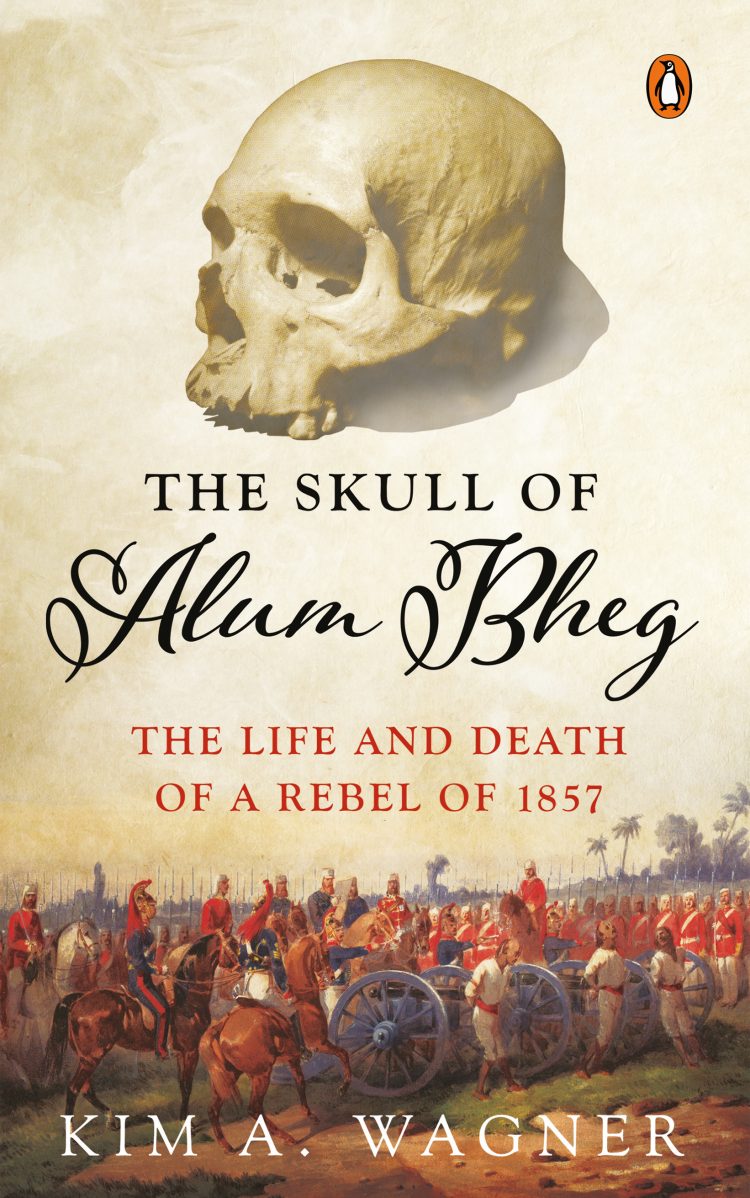 The brief note accompanying the skull was the only clue to its origin, and nobody at the time knew how it ended up in The Lord Clyde to be discovered more than a century after Alum Bheg’s execution. The ‘nerve-shattering discovery’ was duly reported in the local press in 1963, including photographs of the new owners of the pub proudly posing with the grisly trophy. The skull was subsequently put on display at The Lord Clyde as a mascot, and when the owners died it was finally passed on to their relatives, who kept it hidden away in a cupboard.

In 2014, as I was sitting in my office in Mile End in London, writing about colonial executions, I received an email from the couple who had come into possession of the skull. They did not feel comfortable with the ‘thing’ in their house, and yet did not know what to do with it. Having tried and failed to find anything out about Alum Bheg on the internet, they came upon my name as a historian with an interest in the Indian Uprising. My curiosity was obviously piqued, but I also did not really know what to make of the story. After further correspondence, we agreed that I would come and collect the skull in order to conduct further research, and, if possible, verify its provenance. It was clear from the outset that the skull belonged neither in their attic, nor in my office, and we agreed that the final aim of my research should be to prepare for Alum Bheg to be repatriated to India, if at all possible. And so it was that I found myself standing at a small train-station in Essex, on a wet November day, with a human skull in my bag. Not just any skull, but one directly linked to a part of history that I write about and
that I teach my students every year.

It should be no secret that I felt an immediate urge to recover something of the life-story of the man who once looked out through those eye-sockets and chewed with those teeth—the man who in so many ways inhabited the skull as ‘the palace of the soul’ (to use Byron’s words). Alum Bheg never imagined that, more than a century and a half after his death, the remains of his head would still be around, and furthermore be probed and prodded by perfect strangers thousands of miles from where he died. There is indeed a sense of intrusion in handling the skull of an individual who never consented to such an intimate touch, not to mention that Hamletesque realisation of one’s mortality, that someday this could be myself (it also doesn’t help that I am Danish).

To be the custodian, however temporarily, of the remains of another human being is a serious responsibility. I am keenly aware that I am only the latest in a long line of people who have held the skull of Alum Bheg and that it is for me to break the cycle of humiliation and ignominy that he has suffered. Both the manner of his execution, and the subsequent collecting of his head as a trophy, were acts of physical and symbolic violence intended to dehumanise Alum Bheg. In this book, I set out to restore some of the humanity and dignity that has been denied him by telling the story of his life and death during one of the most dramatic episodes in the history of British India. Very few people ever really knew that his skull existed: it was never exhibited in a museum, it is not described in the history books, and there are no descendants clamouring for its return. But returned he should be, and with this book I hope to have prepared the ground for Alum Bheg to finally find some peace, albeit 160 years late.

Excerpted from The Skull Of Alum Bheg: The Life And Death Of A Rebel of 1857 by Kim A Wagner and published with the permission of Penguin. The book traces the history of Alum Bheg, an Indian mutineer who was executed for allegedly murdering a family of missionaries. Dr Kim A Wagner is a Senior Lecturer in British Imperial History at Queen Mary College, London.