The best-selling author of the Shiva Trilogy, Amish Tripathi will reveal the title of his second book in the Ramchandra series on March 22. Amish recently announced on his official Facebook page that he will discuss the second book to Scion of Ikshvaku in an exclusive Facebook LIVE session with the Minister of Textiles, Smriti Irani.

Amish is a banker-turned-novelist known for his novels The Immortals of Meluha, The Secret of the Nagas, The Oath of the Vayuputras and Scion of Ikshvaku. The Shiva Trilogy is the fastest selling book series in Indian publishing history and the Scion of Ikshvaku was the fastest selling book of 2015.  All four books have sold over 3.5 million copies in the Indian subcontinent, with gross retail sales of Rs. 100 crores.  Forbes India has ranked Amish among the top 100 celebrities in India four times in a row in 2012, 2013, 2014 and 2015. 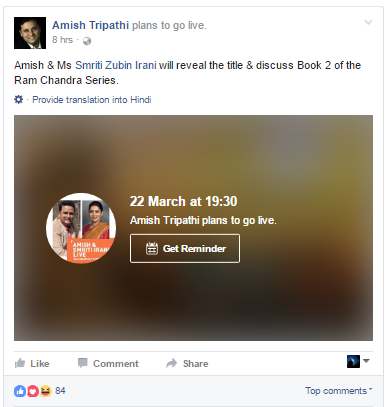 An ardent follower of Lord Shiva since his boyhood, Amish practices a very peculiar style of writing with most of his writings centered on Hindu theology. Sandipan Dev, former editor of Financial Express expressed, “Through all Amish’s books flows a current of liberal progressive ideology: about gender, about caste, about discrimination of any kind. And what I believe separates him from the horde of Indian writers who have jumped to the mythology bandwagon after Shiva’s success, is his historical research.” 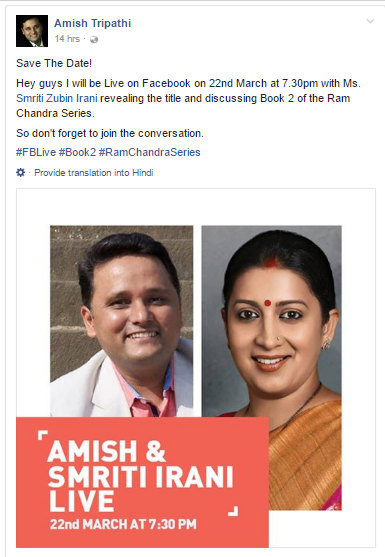 The author is the first among contemporary Indian writers to adopt innovative social media methods to market their books. His last release Scion of Ikshvaku (2015) was teased through a trailer launch on YouTube. He is also the first Indian author to use TV advertisements to promote his book: In 2015, TV commercials for Scion of Ikshvaku aired during IPL matches on Sony Max.