What do you think would increase your chances of getting right-swiped on dating apps? A good sense of humour? Attractive pictures?

Well, turns out that your profession plays an equally important role. Dating app Tinder recently revealed the list of jobs which get the most right swipes for seven countries: the US, UK, France, Australia, Germany, Brazil and India.

While ‘engineer’ was the most sought-after profession for men in Brazil, India showed different results. Male pilots beat professions like business consultants and entrepreneurs to top the list. Professions like actors, creative writers and photographers were also included in the list. As for women, it was observed that the stereotypes are breaking with men swiping right for more specialized professions like engineers, doctors and accountants.

According to Delhi-based psychologist Dr Vibha Singh, “There could be many reasons for this kind of preference. For men, the first priority could be broad-minded women with a balanced approach. Men want educated girls, who can also add to their status quo and professions like engineers and interior designers provide that. These professions are well paid which also mean that the financial responsibilities would be shared equally. And women seem to be attracted to men who are understanding. They also might be attracted to the glamour associated with creative professions. Economic security is not what they are looking for anymore.”

Well, it seems that the millennials have spoken and the age-old narrative of ladka hai to engineer bana do and ladki hai to doctor has been subverted! 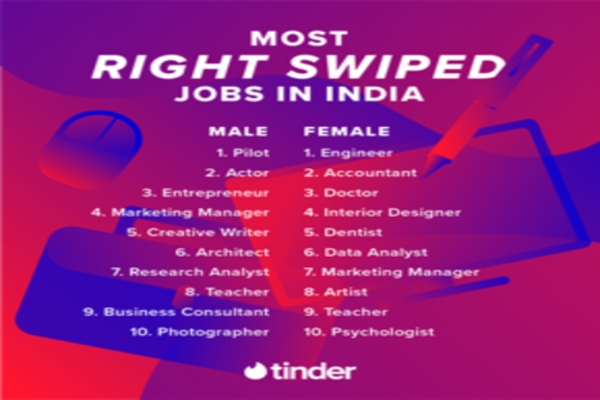