Maharani Jind Kaur was the regent who instilled deep fears within the hearts of the British rulers, so much so that they described her as ‘the Messalina of the Punjab’, a salacious seductress too rebellious to be controlled. She was the wife of the first Maharaja of the Sikh Empire, Ranjit Singh and the mother of the last Maharaja of the Sikh Dynasty, Duleep Singh. Also known as Rani Jindan, she was not just a queen, a wife, a mother, but a force to be reckoned with who etched her name in the pages of history by fighting the invaders even in the face of adversity.

The life of Maharani Jindan Kaur was also the subject of a film called Rebel Queen, which premiered at New York’s International Sikh film festival in 2010.

Modest beginning
Jind Kaur came from a humble household. Her father Manna Singh Aulakh was the overseer of the royal kennels. Her rise from the daughter of a kennel keeper to the Maharani of the Sikh Empire seems like just like a fairytale. Jind Kaur’s beauty caught the eyes of Maharaja Ranjit Singh who summoned her to his court and married her in 1835. Two years later she gave birth to their only child Duleep Singh, who was the last king of the Sikh dynasty.

A fearless ruler
Ranjit Singh’s empire in Punjab began to crumble after his demise in 1839. The British tried to snatch away the kingdom from the heir to the throne, Jind Kaur’s infant son Duleep Singh. It was then that she emerged as the regent for Duleep Singh and took over as the ruler of the Sikh dynasty. During her regime, she not only restored the balance between the army and the civil administration but also formed a strategic alliance with the Governor of Hazara province Chatar Singh Atarivala to provide more pay to her army.

Jind Kaur was a strong woman. During her time as the queen, she cast off the veil, reconstituted the Supreme Khalsa Council and transacted state business in public and reviewed and addressed the troops, proving her defiance of the age-old norms at a time when customs like Sati were in practice. 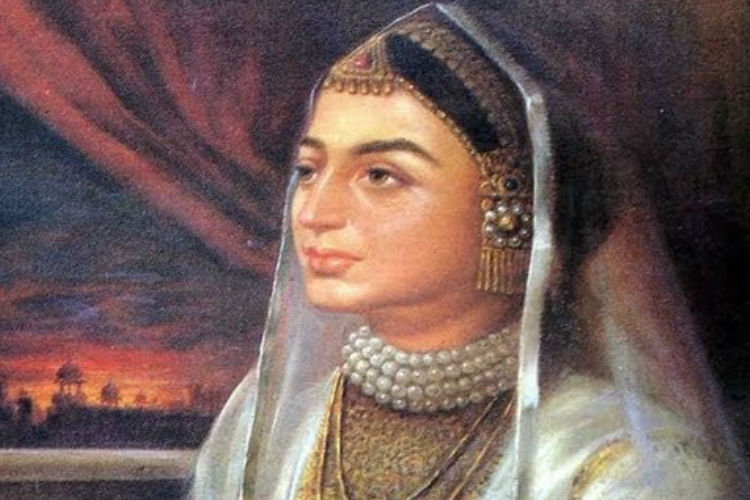 War against the British
During her reign, Jind Kaur was one of the most powerful women in the Northern India. In 1845, British Governor-General Sir Henry Hardinge issued a proclamation declaring war on the Sikhs– the First and the Second Anglo-Sikh War. Jind Kaur dispatched her army to the borders of the Sutlej river to confront the British army. However, the Sikhs lost the war. Although Duleep Singh was allowed to retain his throne, Sir Henry Lawrence was given the control of the policies.

Amid such adversities, Jind Kaur tried to regain control as the regent. She was considered as “a serious obstacle” to British rule in India. To combat her rebellion, the Britishers launched a campaign to discredit her and portrayed her as the “Messalina of the Punjab”. Fearing that her influence on her son could lead to an uprising in the province, the Britishers was imprisoned Jind. They also separated the mother from her 9-year-old son and sent him England.

The Iron Lady
Atrocities on the Maharani Jind Kaur didn’t end with that. She was dragged from the Lahore court by her hair and thrown into the fortress of Sheikhupura and then Chunar Fort in Uttar Pradesh. However, she escaped the fort disguising herself as a servant and traveled 800 miles to Nepal in 1849. She later sent a note to the British telling them how she used magic to escape. Although she could never win back her kingdom, she was reunited after several years with her son

She was given asylum by the Maharaja of Nepal and lived in the country for 11 years. A Britsh resident constantly kept a track of all her activities.

The final blow
Sensing that the Maharani was not a threat to the British rule in India, she was granted permission to travel to England in 1861 with her son Duleep. She passed away two years later in 1863.

Many historians believe that during her brief stay in the country with her son, Jind Kaur rekindled the love of one’s country in Duleep Singh’s heart, following which he tried to convince the Czar of Russia to invade Russia in exchange.