Swati Mahadik, the wife of martyred soldier Colonel Santosh Mahadik, will be inducted into the Indian Army on September 9 this year. Following a rigorous training that spanned over 11 months, she is ready to be inducted into the Army Ordnance Corps (AOC). Swati had joined the Officers Training Academy (OTA) in Chennai last year.

A senior army official said that Mahadik opted to join the AOC, and her choice had been approved. She would be inducted soon. Aged 38, she joined the academy in October last year. According to reports, she fared exceedingly well in the physical and academic tests conducted by the armed forces. A senior officer belonging to the OTA confirmed the same, adding that Swati Mahadik had displayed exemplary courage and determination while completing the training. She was a teacher when her husband attained martyrdom.

“The manner in which she adapted herself to the conditions here, speaks volumes about her determination,” the officer told The Indian Express.

Adding further, the officer maintained that transitioning from civilian to a military life is easier said than done. After graduating from Savitribai Phule University in Pune, Swati became a teacher and taught in various schools over the country, shifting whenever her husband got transferred. Following her husband’s death, she decided to avail the Army’s age concession granted to the wives of servicemen who laid down their lives in the line of duty. She cleared the Services Selection Board (SSB) examination and joined the OTA. 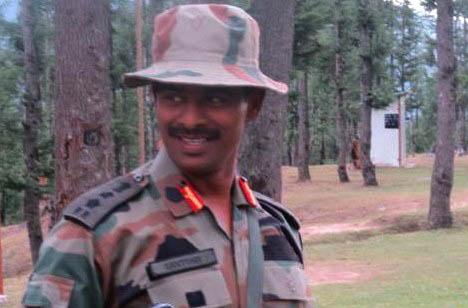 A file photo of Colonel Santosh Mahadik, who died while fighting the terrorists in J&K ‘s Kupwara district in 2015.

Posthumously awarded the Shaurya Chakra, Colonel Santosh Mahadik died while fighting the terrorists in Jammu and Kashmir’s Kupwara district in November 2015. At the time of his death, he was commanding the 41 Rashtriya Rifles Battalion. He was a part of the team that trained the former Indian cricket team captain MS Dhoni that year in paragliding. It should be noted that the wicket-keeper batsman has been conferred with the honorary rank of Lieutenant Colonel.