Seems like the organisers of the World Hindu Congress (WHC), which was held in Chicago, took the Hindi idiom ‘dono haathon mei laddoo hona’ (a laddoo in each hand) a bit too seriously. Though the idiom infers a win-win situation, WHC wants Hindus to lose out on one laddoo because it can be ‘easily fragmented and swallowed’.

At the event, guests were greeted with a box of sweets containing a ‘small soft laddoo’ and a ‘big hard laddoo’. According to the organisers, former resembles the ‘present state of Hindu society’ which can be ‘easily broken down into fragments and then swallowed’. And the latter represents ‘the future vision for Hindu society’ which “cannot be broken into pieces” and is “capable of defending itself against hostile forces”. The surprise sweet boxes were distributed to convey the message that Hindu society is not united. 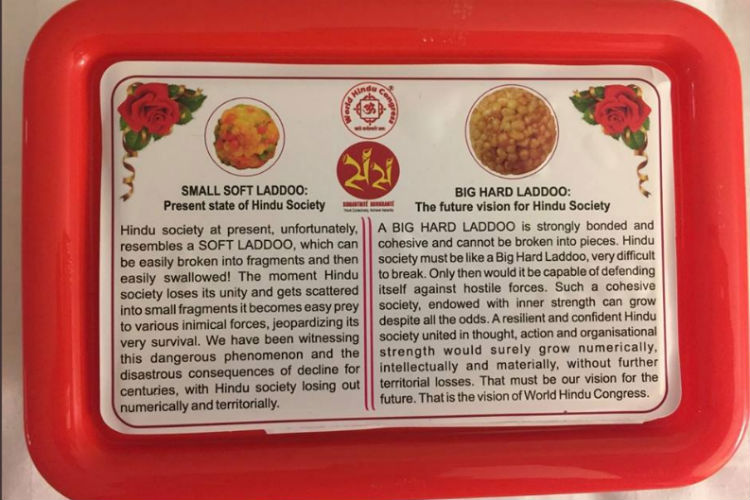 As per Guna Magesan, coordinator Hindu Organisational conference of the WHC,

“The soft ladoo represented the status of Hindus today that they may be easily broken and swallowed while the future vision for the Hindu society should be like a hard ladoo — strongly bonded.”

That wasn’t the only double-take moment at the conference. Swami Swaroopananda, the spiritual head of the Chinmaya Mission, asserted that “we have to convert Hindus to Hinduism” while Sadhguru Dalip Singh of Namdari Panth said that “Sikhs should remain Hindus” because he claimed that it was written so in Guru Granth Saheb.

The second World Hindu Congress was held in Chicago to commemorate the 125th anniversary of Swami Vivekananda’s 1893 speech at the Parliament of the World’s Religions. However, the conference didn’t go down smoothly as the event was briefly interrupted by protesters who were present both inside and outside the venue.