Last Independence Day, the viral photo had evoked a feeling of patriotism and respect. This year, one of the boys, who was seen saluting the national flag while remaining chest-deep in flood water, is facing a hard question: Is he an Indian or not? 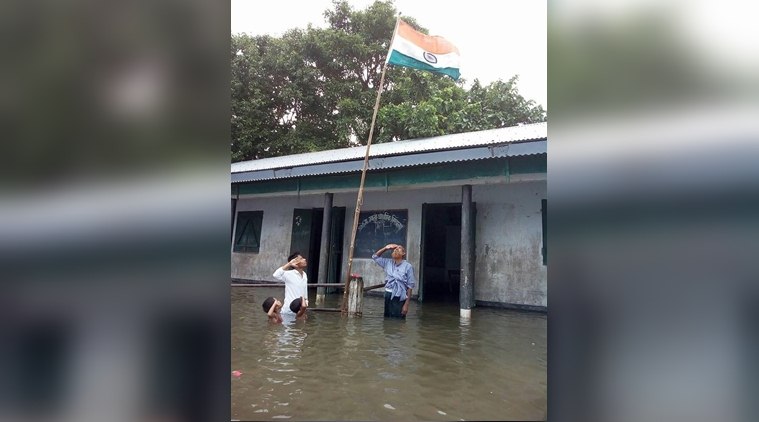 According to a report in The Indian Express, nine-year-old Haydor Khan, on the left, has not found a place in the final draft of the Assam’s National Register of Citizens (NRC). In other words, Haydor has failed to prove that he’s an Indian citizen. All other three persons in the picture – Haydor’s 10-year-old relative Jiarul Khan, head teacher Tazen Sikder, in the blue shirt; and, assistant teacher Nripen Rabha – have made it to the NRC list.

What’s baffling is that everyone else in Haydor’s family – his mother, elder brother, a younger sister and his grandfather – have made it to the list. Haydor’s father died in 2011. And it’s making very little sense to him that why’s he not in the list.

The debate over NRC has been raging on since its release on July 30 with many fearing that India might actually strip 40 lakh people of citizenship at the conclusion of NRC process later this year. While the government has assured that proper verification mechanism and tribunals will be set up for the final verification, it has failed to alleviate the fears of a huge chunk of state’s population.

As of now, Haydor’s mother has submitted a form at the local NRC seva kendra to know the reason for his exclusion, the IE report added.

“People of our community are often rebuked as Bangladeshis but we are genuine, patriotic Indians. We are hopeful that Haydor’s name will appear in the final NRC,” Kolimuddin Mondol, Haydor’s neighbour told the newspaper.