A few weeks ago, Dona Wang, a well-known restaurateur in Kolkata had to admit her daughter and her friend at Charnock Hospital after they met with a car accident. Her daughter Sachiko Seth and her friend Ambika Jay Pradhan who had suffered injuries were kept in the Intensive Coronary Care Unit (ICCU). The patients were discharged a day later and Wang had to shell out a sum of Rs 80,000. However, a few days after the said ‘treatment’, pieces of glass were allegedly found in Pradhan’s wounds.

Furious over the gross negligence on the part of the hospital, Wang complained to the authorities but didn’t get any proper response. And when she put up a Facebook status regarding the same, she was subject to racial taunts.

While narrating the unpleasant ordeal to InUth, Wang said, “Even after the treatment, we found pieces of glasses in the wound above her (Ambika) eye. I had to get a local chemist on my own to clean the wound. What was the point of hospitalisation and spending this much for treatment when they couldn’t even clean the wound in the first place.”

She also added that she was subject to ill-treatment at the hands of the doctor-in-charge when the two were admitted to the hospital. “Despite being told that there were pieces of glass in their wounds, the doctor delayed the treatment by a day. Her behaviour towards us was also rude,” she added.

When she wrote about it on Facebook, a user named Tapas Chatterjee made racist remarks against Wang and her daughter. Chatterjee, a Neurosurgeon at Calcutta Medical Research Institute as per his profile details, felt that Wang was maligning all doctors with her post.

ALSO READ: This Guy’s FB Post On Exorcism In Kolkata Tells Us We Are Still Living In The Dark Ages

Here are the screenshots of the comments: 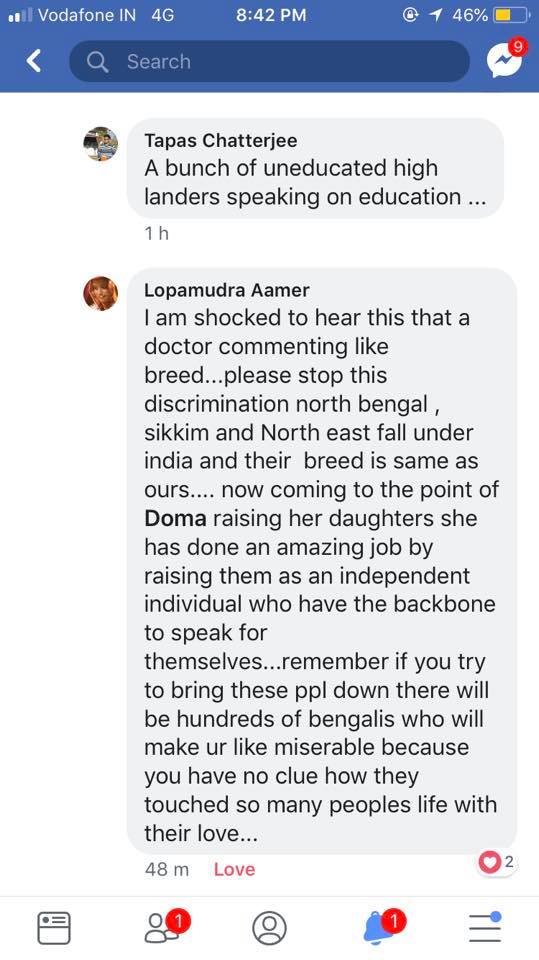 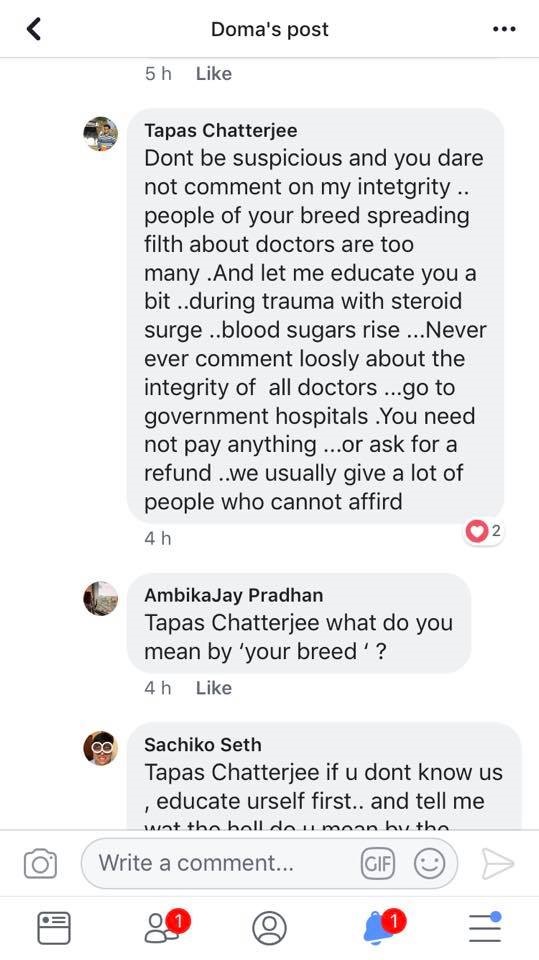 He, later, apologised after receiving backlash from many people for his distasteful comments.

Wang said that after she put up a status on Facebook, she was approached by the hospital. “They took my email id but there has been no communication from them since then,” she said.

InUth tried to get in touch with the hospital authorities but they refused to comment on the matter.