A Delhi based lawyer has sent a legal notice to WhatsApp demanding that the mobile messaging app remove the ‘middle finger’ emoji from the platform. Emoji is a small digital image or icon used to express an idea or emotion.

Gurmeet Singh, who practices law in city courts of Delhi, has also warned that if the company did not remove the emoji within 15 days, he would file a civil or criminal case against it. 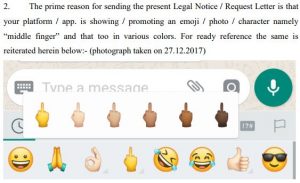 Speaking to inUth, the 32-year-old lawyer, said he came to know about the existence of such an emoji only last week, when someone sent it to him during a heated conversation on the platform.  “It’s a different thing to write F#@k off but when WhatAapp gives you a ready-made template to speak in such violent language, they end up legitimising such behaviour. That’s when I did my research for a week. I found that people have been charged under obscenity clause of the IPC for showing this gesture in public to women. Then how is it okay to have its emoji. Platforms like Whatsapp should be sensitive about these things,” Gurmeet said.

In the notice, the advocate said the middle finger emoji is not only illegal, but also “highly belligerent, invasive, obscene and lewd”

The notice also said that such a gesture, if aimed at a woman, was an offence under the Sections 354 and 509 of the Indian Penal Code.

“By offering to use middle finger emoji in your app, you [WhatsApp Inc] are directly abetting the use of [an] offensive, lewd, obscene gesture,” the notice said.

When reminded that people often get away with use of foul language during offline conversations, and that such exchanges are not in the ambit of law, he said: “I simply hate foul language and I would urge people to act in parliamentary and humble language. I feel that until the foul language which include obscene gestures as well are not eradicated we can’t become a well mannered and well behaved society,” he added.

He also said that WhatsApp has received the notice and is expected to reply soon.

(With inputs from Somi Das)