As hundreds of engineering colleges in India are struggling to fill their vacant seats, a few of them are coming up with lucrative offers to woo students.

Staring at the prospect of imminent closure, engineering colleges have adopted marketing strategies that could have been unfathomable a few years ago. These range from charging a tuition fee of Rs 2500 per year, waiving off first semester fee, doling out free laptops, slashing transportation and hostel fee by half and even two-wheelers to students who paying fee for the entire course by single payment.

At the end of round 1 admissions process in Gujarat colleges, as many as 34,642 seats out of 55,422 have remained vacant, Ahmedabad Mirror reported.

Till last year, Dr Jivraj Mehta Institute of Technology in Gujarat’s Anand charged Rs 55,000 as annual fees. But this year, it is offering admission to students for fee as low as Rs 2,500 per year in Civil, Electrical and Mechanical Engineering disciplines. The only condition: students should have secured ACPC merit rank between 1and 30,000. 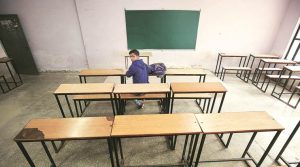 “Our college does not need money. We need good quality students. We have infrastructure worth Rs 50 crore and sufficient staff, but they are under-worked and there’s paucity of good students. So, the management has decided to charge only Rs 2,500 per year as fees,” institute’s principal AM Jain told Ahmedabad Mirror.

Then there’s a college in state’s Kadi town that’s offering concession in fees to existing students if they get new admissions. The management in some colleges has lowered fees to somehow fill up 30% of the seats.

This sudden change of heart of some engineering colleges could be attributed to the recent diktats of AICTE which has clearly stated that colleges with less than 30% admissions for five years will be shut down.

According to a report in Indian Express, the total number of B.Tech and M.Tech seats this year, across all AICTE-approved institutes, has dropped by 1.67 lakh, which is almost double the dip witnessed in 2017-18. The undergraduate and postgraduate engineering intake was 16.62 lakh seats last year, and 17.5 lakh seats in 2016-17