Indian Army Chief General Bipin Rawat recently unveiled the memorial of Company Quartermaster Havildar Abdul Hamid in Ghazipur district of Uttar Pradesh. He even met the 1965 Indo-Pak war hero’s wife Rasoolan Bibi and praised the Param Vir Chakra awardee as well as exhorted the youth to join the armed forces. In 2015, Prime Minister Narendra Modi had paid his tributes to the martyr on Diwali. A year before assuming office, he had met Rasoolan Bibi in Gandhinagar.

Havildar Abdul Hamid attained martyrdom after destroying 6 Pakistani tanks during the 1965 Indo-Pak war. Here’s all you need to know about the war hero.

Born in Dhamupur village of Ghazipur district in UP, Abdul Hamid was inducted into the Grenadiers Infantry Regiment in 1954. He fought in the 1962 Sino-India war at Thang La. Later, he was appointed as the Company Quarter Master Havildar in a company stationed in Ambala.

On September 10, 1965, Pakistan sent Patton Tanks to attack the Khem Karan sector of Punjab. Hamid was deployed in the 4th Grenadiers of the Indian Army. He embarked on his objective of defending his position using the recoilless gun mounted on his jeep. Soon, Pakistanis managed to intrude into the forward company positions. Hamid noticed the tanks heading towards his battalion. He sought refuge, camouflaged among the tall crops and waited for the enemy to head towards him. 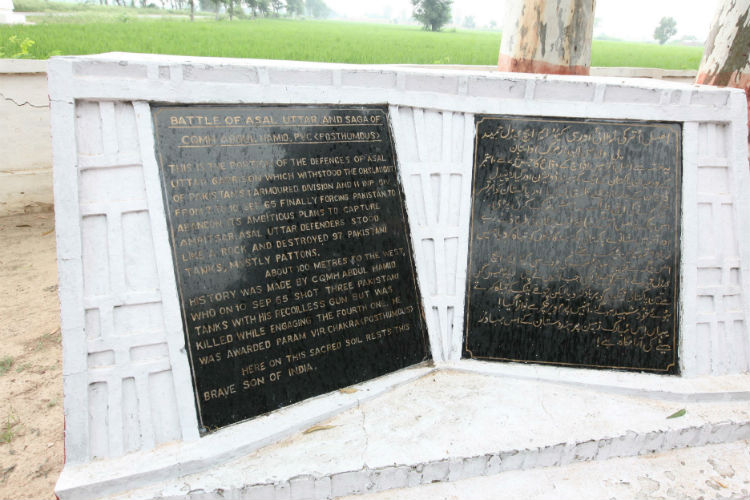 Hamid quickly shot the leading Pakistani tank and then sent another one up in flames. Despite retaliation from the enemy, the brave jawan continued his attack and destroyed another Patton tank. However, Hamid was spotted by the enemy forces who put his jeep under intermittent machine-gun fire. But the Ghazipur-born soldier shot down three tanks in quick succession. However, he was killed by a tank fire before engaging in the fourth one. It was the first instance of the tanks being destroyed by a recoilless gun fire. His brave act inspired his battalion to fight back and inflict heavy damages to the Pakistan army.

Abdul Hamid was posthumously awarded the Param Vir Chakra for showing exemplary courage during the war. Even Prime Minister Narendra Modi paid tribute to him in a tweet two years ago.

Paying homage to CQMH Abdul Hamid. He was awarded the Param Vir Chakra posthumously for his gallantry. pic.twitter.com/fkgdEGEiZu

Also read: This 1971 war hero was the only Indian Air Force pilot to be awarded Param Vir Chakra