For Kolkata’s Motilal Das, tragedy could not have struck in a more ironic manner. The 60-year-old wheelchair-bound hawker, who makes a living by selling clothes on the pavement of Hatibagan market, was all excited about this years International Day for Disabled Persons programme, usually held at Maniktala. Unlike most days, Motilal wrapped up work quite early and was returning home for a lunch so that he could attend the annual event. However, while on his way back home, he was hit by a private bus and landed in a private hospital, Times of India reported.

Motilal had stopped at Khanna crossing to allow other people to cross the road, in the meantime, a bus hit Motilal from behind flinging him off the wheelchair. The 60-yr-old received head injuries and the wheelchair, his only means of mobility, has been damaged without repair.

“It was not easy for me to get a wheelchair. Now that it is it is damaged beyond repair, I cannot move around.I hope someone does something about it,” Times of India quoted him as saying. 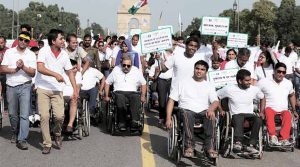 The incident gives a peek into the lives of millions of differently-abled people who are left at the mercy of drivers as most modes of transport remain not suitable for the disabled even in metro cities,

According to the 2011 Census, the number of disabled in India stands at 2.68 crore, or 2.21% of the population. Despite the government’s plans to make at least 50% of government buildings and at least 25% of public transport disabled-friendly as part of the Accessible India Campaign, our buildings and transport continue to be oblivious to the needs of disabled people.