When it comes to local governance, Pune is the best Indian city while Bengaluru is the worst, an all India survey revealed.

The study conducted by Bengaluru-based non-profit, Janaagraha Centre for Citizenship and Democracy, evaluated the quality of governance by analysing the functioning of urban local bodies in 23 major cities across 20 states.

While Pune topped the charts for the first time in the annual survey, the Maharshtra city was followed by Kolkata, Thiruvananthapuram, Bhubaneswar and Surat.

Surprisingly, Bengaluru was at the bottom of the list preceded by Chandigarh, Dehradun, Patna and Chennai.

The survey also revealed that cities were “grossly under-prepared” in delivering a high quality of life that is sustainable in the long term.

“The recurring floods, garbage crises, fire accidents, building collapses, air pollution and dengue outbreaks are only symptoms of this deeper governance crisis in our cities,” the report said.

The survey looked at governance in other countries to explain where Indian metros stand when compared with some mega cities elsewhere. Johannesburg in South Africa, London in the UK and New York in the US scored 7.6, 8.8 and 8.8 respectively, PTI reported. 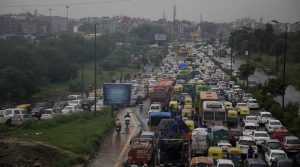 The IT city is grappling with a slew of civic problems including burning lakes, potholed roads, traffic jams, inept garbage disposal system

Not a single lake in the city is suitable for drinking or bathing purposes.

In 2015, a study conducted by Indian Institute of Science (IISc) claimed that water bodies in Bangalore declined by 85% between 2000 and 2014.

However, this is something every Indian city faces, more or less.

Pune-based-activists have rejected the report saying the findings of the survey is far away from ground reality.

“The city is drenched in garbage. Has the governance elevated the life of the common man?” he questioned.