Uttar Pradesh Police has beefed up the security around Taj Mahal after a media report said that terror outfit Islamic State may target Agra’s iconic monument.The security was jacked up after a website showed  a new poster issued by Ahwaal Ummat Media Center, a pro-ISIS media group on its Telegram channel shows Taj Mahal as the target, a terrorist could also be seen standing alongside holding what looked like a weapon.

The graphic has come into circulation almost a week after security agencies carried out combing operation in Uttar Pradesh in which one accused Saifullah was eliminated and six others were arrested.  It was reported that Saifullah was brainwashed by ISIS through the online medium and had carried out an attack on a train in Bhopal. 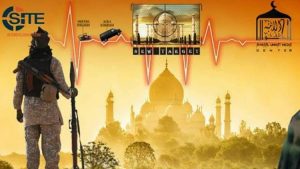 It also features three inset pictures an image of Taj Mahal within crosshairs with the words “New Target” below it, a van with the Arabic text “Agra istishhadi” (Agra martyrdom-seeker) written in English, implying the threat of a suicide bombing, and an image of a “bomb”.

The message, showing Taj Mahal as “new target”, was posted on Telegram on March 14, according to Site Intelligence group. “Link being circulated that says Taj Mahal will be targeted in attack. Security has been enhanced in and around the area,” UP ADG (Law&Order) Daljeet Chowdhary said On Friday.

A day after Saifullah was killed by Lucknow ATS, ISIS’s Khorasan wing used social media to encourage Indian Muslims to carry out attack in India . The pro-ISIS channel had also posted a picture of Saifullah and described as a “soldier of the Khilafah from India”.