In a yet another interesting turn of events in the highly-anticipated Karnataka Assembly floor test, newly appointed BJP chief minister BS Yeddyurappa on Saturday resigned from his post. Two days after he took the oath of office and secrecy under Governor Vajubhai Vala at a ceremony at Raj Bhavan, Yeddyurappa stepped down after BJP failed to prove majority in the floor test.

Yeddyurappa, who has previously served as the chief minister of the state on two occasions said, “I will lose nothing if I lose power, my life is for the people.” He also added that the since BJP managed to win 104 seats, people’s mandate was with the party. 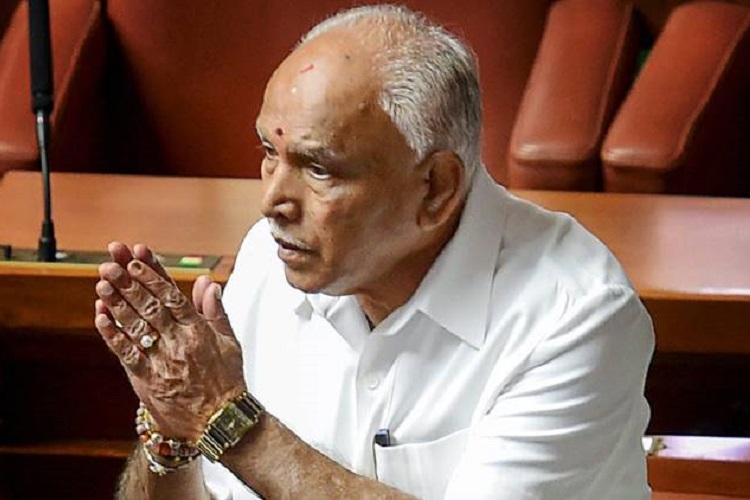 “If only people would have given us 113 seats instead of 104, we would have made this state a paradise,” he said.

In the recently concluded Karnataka assembly elections, BJP emerged as the single largest party after securing 104 seats falling short of 8 seats while Congress-Janata Dal (secular) coalition won 115 seats. On Thursday, Karnataka governor Vajubhai Vala had invited BS Yeddyurappa to take the oath to form the government, and was given 15 days to prove his majority. However, Congress leaders moved Supreme Court which on Friday ordered the trust vote to be held on Saturday.

ALSO READ: All That Happened Overnight To Decide The Future Karnataka CM

Meanwhile, amid the accusations of horse-trading of MLAs which were levelled against the BJP, Congress on Friday released alleged audio tapes of BS Yeddyurappa’s conversation with a Congress MLA BC Patil.

“Don’t go to Kochi, come back. We’ll make you a minister and help you in whatever way you want,” he is allegedly heard telling the MLA.

“Don’t go to Kochi, come back. We’ll make you a Minister and help you in whatever way you want.”
This audio recording of @BSYBJP trying to lure Congress MLA goes on to prove, that Yeddyurappa is working hard to live up to his reputation of being corrupt and devoid of ethics. pic.twitter.com/HSvh2chnlC

The party had earlier released a similar audio tape in which BJP’s Janardhana Reddy was allegedly heard convincing Congress MLA BasanagoudaDaddal. “I’ll arrange a meeting with the National President. You’ll become a minister. You’ll make 100 times the wealth you made so far,” he allegedly said.

BJP, has however, brushed aside the allegations and called  it the job of “mimicry artistes” and the “dirty tricks department” of the Congress, reports The Indian Express.

As soon as Yeddyruppa tendered his resignation, Congress workers broke into celebrations across the country.

“I am proud that opposition stood together and defeated the BJP and we will continue to do so,” party chief Rahul Gandhi said while addressing media persons in Delhi. JD (S)’ HD Humaraswamy, on the other hand, said that his party is waiting for the invitation from the Governor to form the government.