While you were sleeping, a lot happened in the race to become the Chief Minister of Karnataka. In a rare midnight hearing, the Supreme Court addressed a petition filed by the Congress-JDS alliance, which was formed in a bid to keep the saffron party from securing yet another state. After a three-and-half hour-long hearing, the apex court refused to stay on the swearing-in of BS Yeddyurappa, who took his oath as Chief Minister on Thursday morning.

The drama in Karnataka had intensified when, despite Congress (78 seats) and JD-S (37 seats) forming an alliance to beat BJP’s 104 seats, the BJP sprung back when Governor Vajubhai Vala intervened to settle the hung assembly. While the allied parties were busy picking JD-S state president HD Kumaraswamy for the position of Chief Minister, the Governor invited BJP’s Yeddyurappa to form government in the state. Upset over losing the state, Congress and JD-S appealed to the Supreme Court. 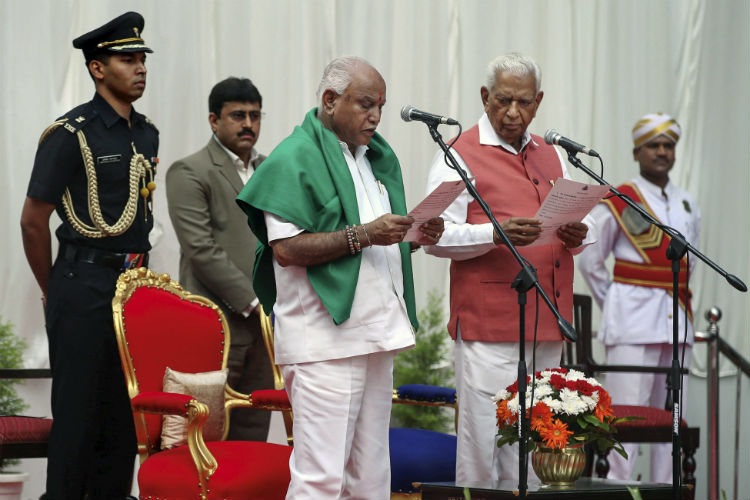 Amid allegations of horse-trading, the BJP on Wednesday night confirmed the oath-taking ceremony of Yeddyurappa:

The moment that crores of Kannadigas are awaiting is here.

Sri @BSYBJP will take oath as Chief Minister of Karnataka tomorrow morning at 9.00 AM at Raj Bhavan.

The movement to build our Suvarna Karnataka has started. #CMBSY

The suspicions were further put to rest when the Governor’s invite for Yeddyurappa was released. In his letter, the Governor gave the BJP leader 15 days to prove majority in the state. 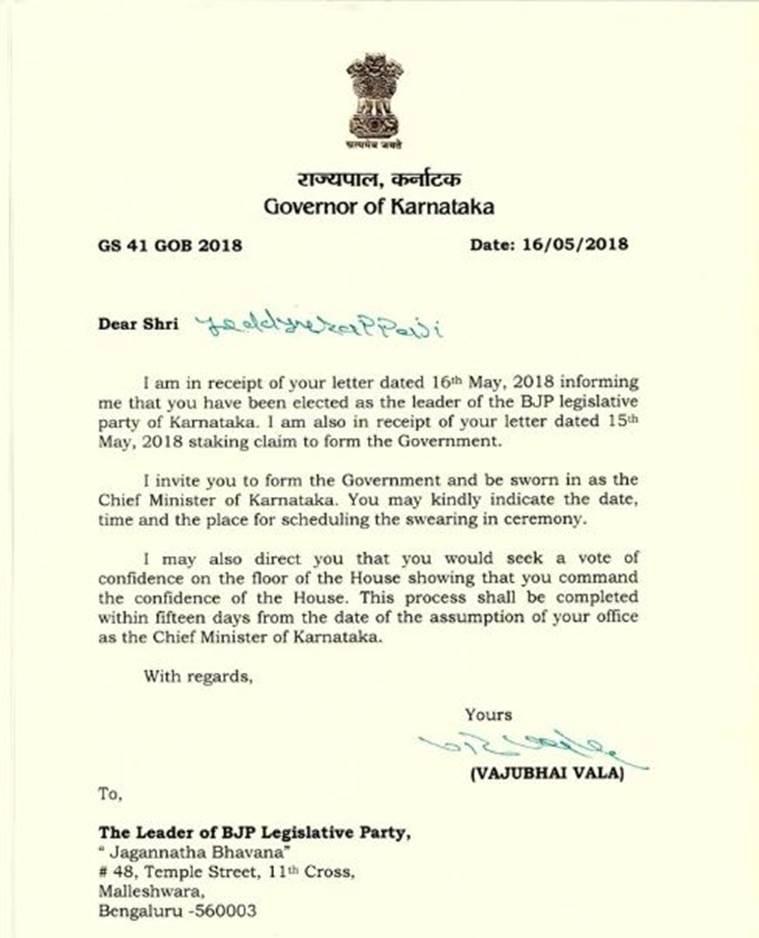 Following the Governor’s decision, members of the Congress party deemed it “partisan and biased”. Congress’ Randeep Surjewala said that the Vala had “shamed his office” while Kumaraswamy deemed it “unconstitutional”. The Congress demanded an urgent hearing with the Chief Justice of India.

Since swearing in now announced for 9 am on 17/5/18, in a 9 pm invite by governor today to BSY to form Govt, urgency to seek listing in sc tonite is self validating. If sc registry accepts petrs request on basis of petn settled by me and filed tonite, I wl appear and argue tonite

Petitioning to the Supreme Court, the Karnataka Pradesh Congress Committee and Kumaraswamy requested the quashing of the Governor’s invite as it was “unconstitutional, arbitrary, illegal, void-ab-initio, and violative of Article 14 of Constitution of India”. The petition further requested the court to direct the Governor to “invite the alliance of JD(S) and INC which has the support of more than 112 MLAs to form the government under the leadership of Shri HD Kumaraswamy.”

Accepting the petition, which was argued by Singhvi for Congress, the Supreme Court Registrar moved to CJI Dipak Mishra’s residence post-midnight. A three-judge bench of Justices AK Sikri, SA Bobde and Ashok Bhushan was the formed to hear the petition. 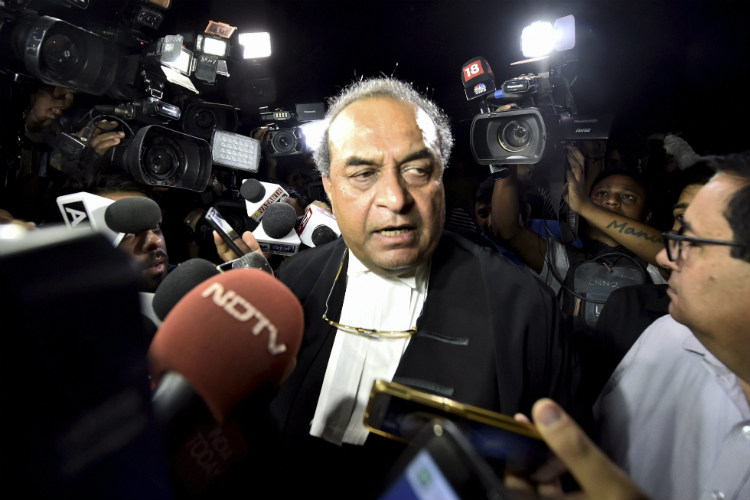 Mukul Rohatgi at the Supreme Court for the hearing of Congress and JD-S petition. (Courtesy: PTI Photo/Ravi Choudhary)

While Singhvi argued that giving Yeddyurappa 15 days to prove majority would be to “encourage the constitutional sin of poaching”, senior advocate Mukul Rohatgi—who represented BJP MLAs Govind M Karjol, C M Udasi and Basavaraj Bommai—demanded that the petition be quashed, saying, “The petitioners are trying to stultify a democratic process.”

At 05:30 in the morning, SC came to a conclusion and refused to stay the swearing-in, ruling, “As far as swearing-in is concerned, we are not restraining it, but we are making it subject to the outcome of the case.”

I salute the Supreme Court. If I were Mr Yeddyurappa, I will not take oath until the hearing at 10.30 am on Friday, 18th May. 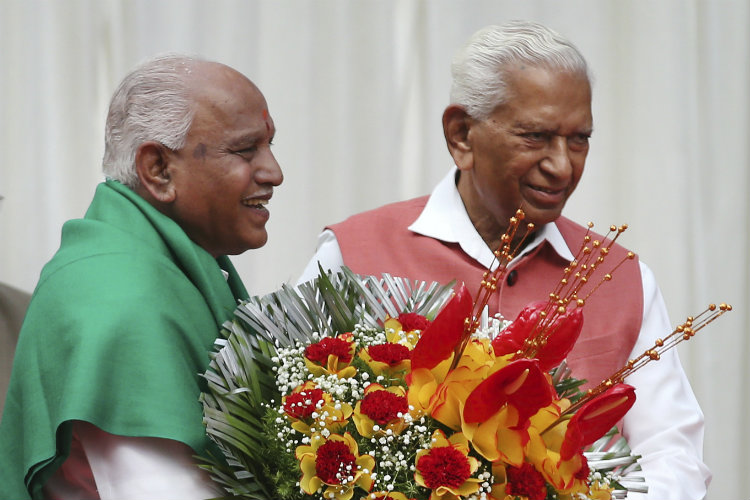 On Thursday morning, BSY was sworn-in and now awaits a floor test to prove majority in the state. Congratulating him on his victory, BJP President Amit Shah tweeted:

Congrats to Shri @BSYBJP ji for being sworn in as the CM of Karnataka. This is the victory of every Kannadiga who voted to uproot the corrupt & divisive politics of Congress. I am sure the new govt under the guidance of PM @narendramodi will fulfil the aspirations of the people.

However, the SC ruling has now sparked additional debates. Disagreeing with the verdict, senior lawyer Ram Jethmalani said that the Governor’s order is an “open invitation to do corruption”. Jethmalani has now moved the SC against the Governor’s decision inviting BJP to form government in the state.

#WATCH Senior lawyer Ram Jethmalani speaks on Karnataka politics, says, ‘What has BJP said to Guv, that he did such a stupid action? Order of Guv is open invitation to do corruption.’ Jethmalani has approached SC against Karnataka Guv’s invitation to Yeddyurappa for forming govt. pic.twitter.com/uLa0oXcPQZ

Congress has been protesting against the court’s ruling. Congress leader DK Shivakumar said, “It is a shame for the BJP that they have gone down to this level.” He added, “It is a short-lived government.”

Reportedly, the Congress party now intends to stage a protest at Rajghat in Delhi at 2:45 PM on Thursday.