It was a proper Bollywood wedding for US-based engineer Hrishi Mohankumar Sathawane and his partner Vinh. And, why not, since the Supreme Court has decided to rethink its laws against homosexuality.

The two got married in a grand traditional ceremony at Yavatmal in Maharashtra on December 30, NDTV reported. This came days before the Supreme Court decided to review the criminalisation of homosexuality on January 8.

Sathawane is a graduate of the Indian Institute of Technology (IIT) Bombay and resides in California. In a Facebook post, he explains how his parents were against his sexual preference. However, he was able to convince them to get married to his partner Vinh, who is from Vietnam.

The hotel, where the Vinh and Sathawane wedding was held, was close to a police station. One can assume that the legal ambiguity of the laws against homosexuality made cops and the hotel authorities seal their lips shut as the couple completed their wedding rituals in traditional Marathi attire.

I had a lovely commitment ceremony in India with my partner Vinh in Yavatmal, Maharashtra India on 30th Dec 2017 in the presence of my parents, relatives, high school/college friends, teachers, gay friends, their kids and parents and a lot of very open-minded near and dear ones from Yavatmal.

There was a lot of media coverage where they found Facebook posts from my friends. In a rush to publish most did not bother asking for my permission to use the pictures or bother to get the story from me and cooked up whatever they believed would help their sales by making the story sensational.

The story is simply two souls fall in love, get support from family and friends and celebrate the commitment ceremony in a private function where all near and dear were invited and they heartily supported their commitment to spending the rest of live together. Instead, the media sensationalized to two foreigners sneaking back to India and commit some allegedly illegal event with opposition from everyone imaginable and somehow close to even law enforcement folks. I’m so much ashamed of such media and their professionalism.

I’m writing this post to get the facts right and the story as well.

I, Hrishikesh Sathawane was born (in 1974) and bought up (till 12th Std) in Yavatmal. Despite being in merit list in 12th std, I took 1 year to prepare for IIT and fortunately got into IIT the next year. I have a B. Tech degree in Engineering Physics from IIT Mumbai/Bombay and then an MS EE degree from Iowa State University. I later also finished MBA from UCLA Anderson (2008-2011). I was an engineer in the hi-tech field before the MBA and then marketing strategy post MBA.

My husband Vinh was born in Ho Chi Minh city in Vietnam and his family moved to the USA in 1990 when he was 8yo. He finished his schooling and bachelors degree in Stockton, California. He is currently an English and Math tutor.

Growing up, I knew I was different but it was difficult to make sense of the feeling as I did not know anyone else who had similar feelings. I chose to focus on studies and fortunately did well there. A psychology class at IIT briefly mentioned homosexuality but I did not think it was me. Eventually, when I went to a gay support group at Iowa State University and talked to other open and confident gay men, I understood I am also gay. I came out to my parents immediately in late 1997. Over the next few years they went through a range of emotions from denial, blaming, frustration, crying and what not. They believed if I just marry a women, it will all be fine.

However, I refused to ruin the life of another woman to imaginary societal pressure to get married. My sister played a crucial role in helping them understand the situation. After that initial strong opposition, they gradually came around and started accepting. Trikone (the oldest LGBTQ support group for South Asians) and PFLAG (Parents Friends and Families of Lesbians and Gays) helped me tremendously during the coming out to myself and coming out to parents process. I was on the board of both of these organizations in mid-2000s. When my parents first visited the US in 2007, both parents participated (a bit reluctantly) with the Trikone float in the San Francisco gay pride parade. I felt so blessed to have such a loving and supportive family. They marched in the same pride festivities many more times in the following years.

Vinh and I first got in touch with each other on a gay dating website (okcupid.com) in late Oct 2016 and met on a dinner date two days later. We had more dates and then decided to have a road trip in Australia in Dec 2016. At the end of the road trip, I attended Vinh’s cousin’s wedding in Sydney where his entire family welcomed me as his significant other. This certainly made a deep positive impression on me. After coming back we had weekend dates and the love blossomed. I proposed Vinh in April 2017 when we were visiting Antelope Valley California State Reserve. My family was overjoyed and threw a party in June 2017 to celebrate the engagement. Later we decided to have a commitment ceremony during our India visit in Yavatmal and a legal wedding in Stockton California in the summer of 2018.

Our commitment ceremony happened on 30th Dec 2017. The day started with a private ‘haldi’ function at our residence in the presence of family and close friends. The function started with group pictures with the guests as they arrived. Later we mimicked some of the Hindu wedding rituals such as garland exchange, flower bouquet exchange, ring exchange etc. The ‘mangalashtak’ was played from a YouTube video. Later we had more group pictures, dance entertainment, and some speeches. I estimate about 100 or so attendees. There was only one US resident present besides Vinh and myself. There were 6 people from Mumbai, 4 from Pune, 3 from Delhi and a couple more from other parts of India. The rest were all from Yavatmal, either currently residing or they had lived there in the past. Thanks to my high school friends who came in big number and showed amazing support. Also thanks to some of my relatives, school teachers and other close friends of family who came to celebrate this special day with us. I must say Yavatmal is far more progressive than what one would imagine. This was just a tip of ice-burg. A lot of others who supported could not make it to the function for one or the other reason. Many more later mentioned they would have loved to attend but either did not know or did not get the invite. Overall the event was peaceful and celebration of two souls coming together to have a wonderful life ahead.

Many questioned legality of this event. According to IPC 377, gay sex and many other forms of heterosexual sex also is illegal. But there is no law to prevent a commitment ceremony. The legality of a gay marriage is unclear in Indian law. Its neither legal or illegal. There is no legal basis to prevent a Hindu wedding for gay people.

We are back in the US now after a brief stay over in Mumbai. We have been living together for many months already so honeymoon does not really make sense. In a way Australia trip was our honeymoon. We look forward to adopt a couple kids as both of us are not keen on having biological kids. We’ve started the process last year by taking classes organized by Alameda County foster kids program. After more classes/trainings and checks we look forward to fostering kids and hopefully adopt a couple of them eventually.

Sathawane, a B-Tech graduate from IIT Bombay, is currently residing in California and is in possession of a green card. 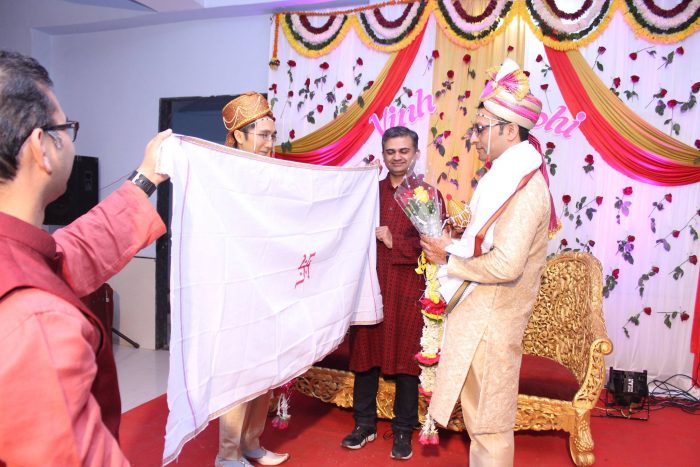 The happy couple got engaged in mid-2017 and had an American wedding in October. According to The Times of India, the owners of the hotel claimed it was just a simple get-together, while Sathawane’s social media profile is proof that the marriage was solemnised.

The photos have since gone viral with people giving good wishes to the couple. 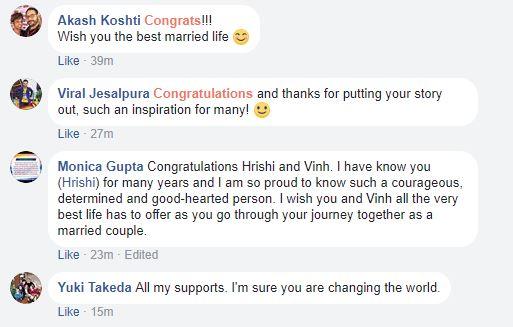