What happened?
A dilapidated Portuguese-era bridge connecting Sanvordem (a tributary of river Zuari) and Curchorem villages in South Goa district, collapsed. The bridge had been closed for traffic for the last four years. Fire and emergency services personnel were busy rescuing the suicidal woman, but some 50 people were watching their efforts from the bridge when it could not take their weight and collapsed. 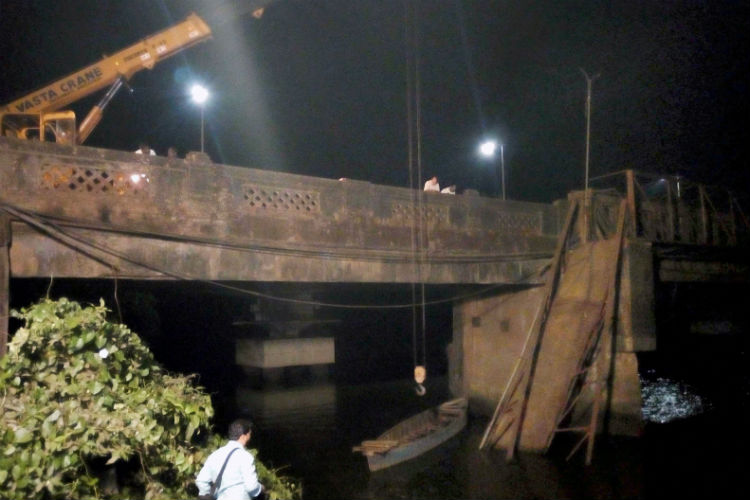 Rescue and relief works in progress after the Sanvardem Bridge collapsed in Curchorem, South Goa on Thursday. (Photo: PTI)

Search operations:
The divers from Indian Navy and a private agency which mans Goa’s beaches have been pressed into action to search for those missing. After having been halted for a night, the rescue operations began at 7.30 am on Friday morning to find those missing in the bridge collapse. Efforts are underway to see if there are any more bodies in the water. The search operation had to be called off around midnight on Thursday owing to poor visibility. Also, since there are crocodiles present in the river water, precautions are being taken for the safety of the divers.

“Diving was stopped at around 3.30 am on the request of the collector. The diving operation has resumed this morning. There may be two more persons missing. A helicopter sortie is being undertaken along the river for aerial search,” a spokesman of the Indian Navy said.

People in shock:
The only body that the rescue team retrieved was of 30-year-old Basavaraj Malanavar. Hi sbody was found clinging to frame of the bridge. Officials claim that those people who have been rescued are “in shock”. The injured have been admitted to a hospital.