Ahead of 69th Republic Day, 18 courageous children including seven girls have been selected for the National Bravery Awards 2017.

The awards are divided into five categories — Bharat Award, Geeta Chopra Award, Sanjay Chopra Award, Bapu Gaidhani Award, and General National Bravery Awards, and will be given away by Prime Minister Narendra Modi on January 24.

18-year-old Nazia from Uttar Pradesh would be bestowed with the Bharat award, the most coveted in the list, for helping local police capture perpetrators of an illegal business of gambling and betting. She held her ground despite threats, and managed to put an end to the decades-long terror and harassment.

17-year-old Karanbeer Singh from Punjab will be awarded the Sanjay Chopra award for rescuing 15 children from a school bus that had plunged into a drain. Despite being injured, Singh showed great courage and helped other children to come out of the water-filled bus.

Three of the bravehearts are being awarded posthumously. 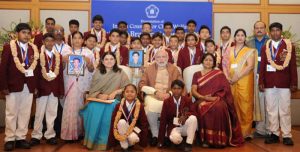 14-year-old Netravati M Chavan from Karnataka, who lost her life while trying to save two young boys from drowning, will be posthumously given the Geeta Chopra award.

While Netravati managed to rescue 16-year-old Muthu from a pond, she lost her life in a failed attempt to save 10- year-old Ganesh, who drowned as well.

While Peinlang rescued his 3-year-old brother from their burning house, Dalai saved her friend from the jaws of a crocodile.

President Ramnath Kovind will host a reception for the awardees — seven girls and 11 boys — who will also be participating in the Republic Day parade on January 26.