The dawn of the #MeToo movement may have finally gained momentum in India on October 5 as several Indian women journalists spoke about their encounters with sexual predators in the media industry.

What has triggered the series of allegations was when a Twitter personality revealed how stand-up comic Utsav Chakraborty sent sexually explicit messages to her and harassed her.

I want everyone to know @Wootsaw is a piece of shit. He sent me a dick pic, was creepy, then cried saying I’ll ruin his career if I tell others. I told two of the most influential men in comedy in India. Nothing happened. Let me tell you what else he has done with others.

Kukreja’s allegations empowered several others to come out and speak up about the sexual harassment they had faced at the hands of Chakraborty. The comedian had allegedly asked minor girls to send nude images of themselves.

On Friday, women journalists from various establishments confronted those who had harassed them at some point publicly on Twitter. Male journalists part of mainstream media houses like Business Standard, The Times of India and The Hindu had been named and shamed by female journalists.

Anoo Bhuyan, a reporter of an independent news website, The Wire, shared her story on Friday. Bhuyan alleged that a fellow journalist who is a principal correspondent of Business Standard India, had approached her and asked her to sleep with him because he “thought, I’m a woman like that…,” Bhuyan recalled.

Journalist Sandhya Menon shared an account of how the current resident editor of Times of India (Hyderabad) had put his hand on her thigh and tried to imply that he was available.

Back in 2005, I was 25, and taking shelter from the flood in Bombay at a colleague’s house, @manojanthikad sent me a text, “I want to fuck you.” He took my number from a mutual friend and decided to charm me when Bombay was drowning with that approach. https://t.co/andMvyuV5X

Former trends editor of HuffPost was accused of sending unsolicited pictures that he claimed were sent as “a joke”. Twitter user @DabbaVader shared her experience from three years ago when he had sent her inappropriate messages on Snapchat.

Okay. After the @/wootsaw incident I would just like to bring attention to @/kitanurag if it hasn’t been brought already. This happened three years ago and I am mentioning it so that if it did happen to other women they can speak up on it too. I am sure it did.

Another barrage of allegations surfaced on Saturday as more women took to Twitter to come out with their stories. Writer Chetan Bhagat was also accused of harassment on Twitter by someone who wished to remain anonymous. The writer responded to the allegations:

My response to the screenshots, that just came a couple of hours ago. Been as truthful about it as possible : https://t.co/1JC7kVcodl

Since these three women publicly confronted their harassers, scores of women have come out in support or shared their own stories of harassment.

Meghnad Bose, a Senior Correspondent at The Quint, is accused of harassment and inappropriate behaviour by multiple women when they were his batchmates at the Asian College of Journalism (ACJ). Since the women came forward, several of Bose’s batchmates, some anonymously, have corroborated the accusations with instances of his behaviour at ACJ and St Xavier’s. 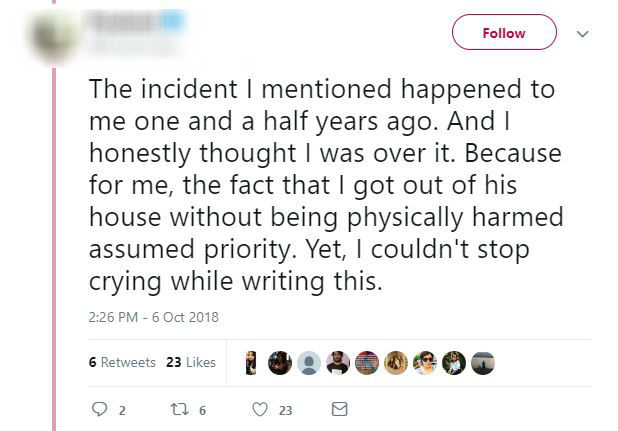 The Quint has said that it has been made aware of the allegations and is “ascertaining further details”.

Multiple anonymous accusations have surfaced against Sidhant Maheshwari, a video producer at Cricbuzz, with women accusing him of predatory behaviour when they were his batchmates at ACJ. 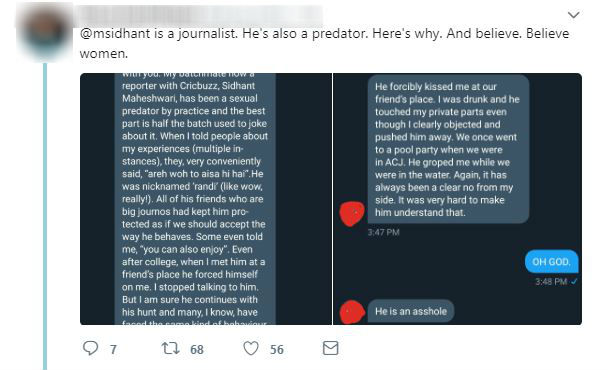 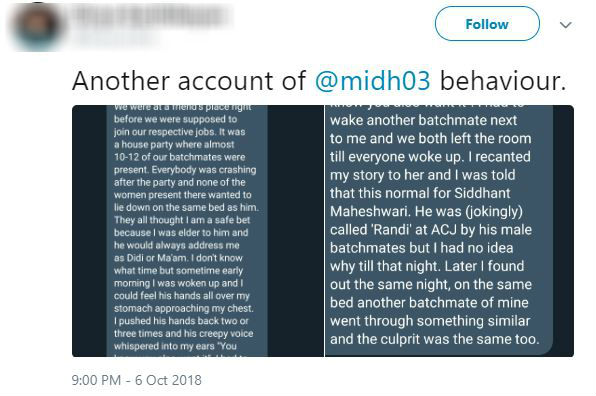 A journalist has anonymously made an accusation of unsolicited sexual advances by Chitranshu Tewari, who works in the sphere of Business Development and Public Outreach at Newslaundry. Newslaundry has said that it is investigating the accusation will take measures according to the findings.

#MeToo A journalist who wishes to remain anonymous and used to work at @newslaundry has shared her creepy experience with Chitranshu Tewari who still works at NL. Screenshots are with her consent. #timesup pic.twitter.com/7rrOpW9xxP

A journalist has anonymously shared details of how Abhishek Chinappa, a photojournalist with Reuters, blocked the door, locked it and begged her not to leave until she kissed him. 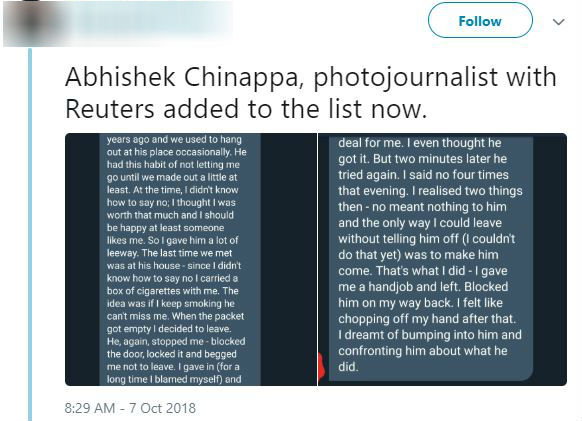 The Mumbai Press Club on October 6 gave out a statement, saying that it stands in solidarity with the women journalists who have accused some people in the profession.

“In the last two days, several women colleagues have narrated their woes in the media, particularly in the social media. We condemn such acts against our women colleagues and demand strict action from their respective employers and law enforcement agencies (in case individual cases have been reported to the police and other agencies).”

The stories that are being widely shared have definitely empowered a lot of women to come forward with their own account. However, it remains to be seen whether the #MeToo movement would be able to hold its ground at a time when where we’re still reluctant to believe survivors.

(Note: This copy will be updated with more accounts as soon as we get permission to share the stories)