Varanasi’s Jayapur village grabbed headlines three years ago after it was adopted by Prime Minister Narendra Modi under Adarsh Gram Yojana. The streets of the entire village were illuminated with solar lights in the first half of 2015. Three years on, the area has once again plunged into darkness.

Of the 135 solar streetlights in the village, at least 80 are not functioning as their batteries have been stolen in the last one year.

While speaking with Hindustan Times, village head Srinarayan Patel said, “About a year ago, the batteries of 50 streetlights in the village were stolen. I lodged a written complaint at the police outpost of the village and also informed the Rohania police about the theft.”

“Before any action could be taken, batteries of 30 more streetlights were stolen. I informed the police yet again but to no avail,” he added.

The HT report also said that the solar lights were installed by a public sector bank and private companies under their corporate social responsibility (CSR). 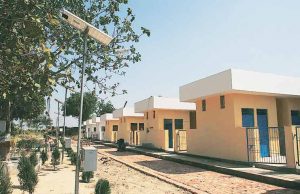 Expressing his ire over police inaction, Patel said, “The thieves have not been identified and the batteries are yet to be recovered. I have reminded the police about it on many occasions.”

He also demanded that night patrolling should be increased to check such incidents in the future.

Patel also reported the issue to the Additional director general (ADG) Vishwajeet Mahapatra who visited the village to take stock of the situation.

Mahapatra instructed the police to ensure proper vigil in the village and directed the in-charge of Jayapur police outpost and Rohania police to ensure that the battery thieves are arrested.