In 2018, Sanjay Jatav became the first dalit to take out his baraat in Nizampur village of Kasganj district (Uttar Pradesh) in nearly 80 years. Now, he is all set to contest elections in the upcoming Lok Sabha polls. Two political parties have offered an election ticket to Jatav to contest elections from the Hathras seat.

Jatav has been approached by Ambedkar Samaj Party and Jan Adhikar Party to contest the elections. He told TOI:  “I will choose a political party to fight elections soon. My endeavour is to bring equality in society, and I believe that 18 lakh voters of Hathras will back me.”

Tej Singh, the chairperson of Ambedkar Samaj Party, reasoned why he wanted Jatav to campaign on his party’s ticket: “We want Sanjay to contest elections on our ticket as he represents the ‘new face of dalit youth’. He fought against all odds to break a regressive tradition.” 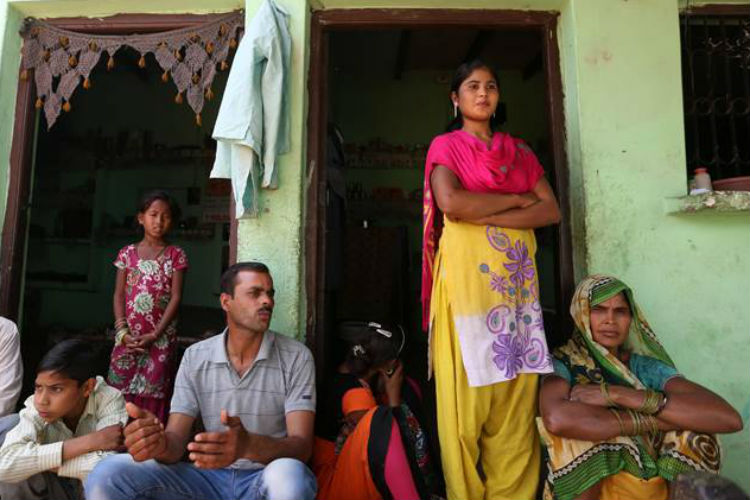 The bride Sheetal with her family (Courtesy: Express Photo/Gajendra Yadav)

This is not the first time a political party has taken interest in Jatav. In November 2018, Jatav was identified as ‘a new icon for dalits’ in Congress’ internal circular that directed party leaders to identify people for outreach.

Defying caste prejudice that plagued Nizampur for decades, Sanjay Jatav’s wedding procession traversed the streets of his village in the presence of over 150 police officers in July 2018. The Thakurs, who dominate the village, had earlier opposed the baraat on the basis of their claim that no dalit has ever taken out a wedding procession before. They allegedly issued a threat to disrupt the wedding after which the police observed that a baraat passing by upper-caste homes may incite violence. However, Sanjay was resolute in his decision to end the caste-based discrimination and intended on taking his bride, Sheetal, home. The families appealed to Allahabad High Court which directed the authorities to follow a route to avoid any untoward incident.