Recently, a video of a youth thrashing an older man had gone viral. The video was widely circulated across various social media platforms along with captions suggesting that the assailant was a Muslim and the victim was a Naga Sadhu. The video was further popularised after Iranian-born Australian cleric and scholar, Imam Tawhidi, tagging Prime Minister Narendra Modi, tweeted it saying, “Islamic Extremists in India beating up a poor and elderly Indian beggar. I truly wish this Islamist criminal is arrested soon.”

Soon, various users started sharing the video. Actress Koena Mitra also retweeted the video saying, “He is a Naga Sadhu,” adding that incidents like these are an everyday affair in the country. Squint Neon and Postcard Telugu among other accounts also shared the video affirming that a Naga Sadhu was being beaten by a Muslim man in an unknown Uttarakhand city. 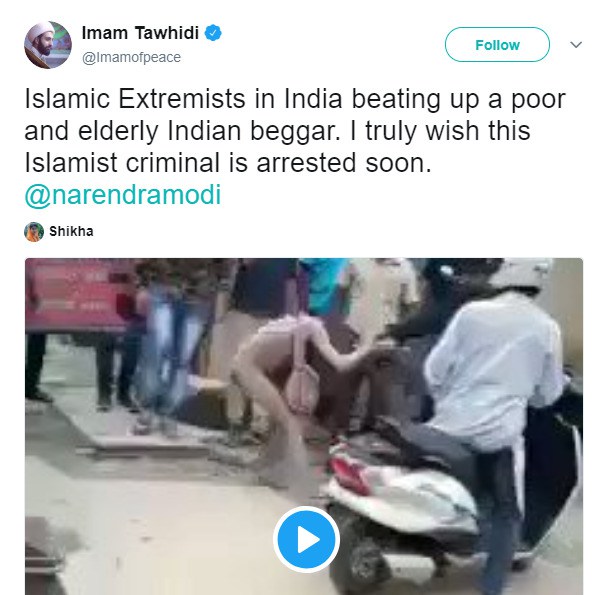 However, several of these tweets were later removed after these claims were proven to be fake. Refuting the claims, SSP Dehradun tweeted saying that the man was not a Naga Sadhu and was thrashed after he molested a woman in an inebriated state.

According to Alt News, SHO of Patel Nagar confirmed that the incident took place in Dehradun and the reports circulating online are false. “The man who was beaten up is not a Naga Sadhu, but a beggar. He is married and has six children. He went to a house to beg for food and molested the woman who brought him tea and biscuits.”

Dehradun Police later added that the incident occurred on August 24, when the man, identified as Sushil Nath, impersonated a beggar to seek alms. “Sushil Nath is an addict who has been involved in such cases in the past as well. On 24.08.2018, he entered a house and molested a woman, following which he was beaten up by the woman’s brother Shubham and other locals,” the police confirmed.

Dehradun Police have now registered a case against Nath under Indian Penal Code (IPC) Sections 354B (Assault or use of criminal force to woman with intent to disrobe), 504 (Intentional insult with intent to provoke breach of the peace), 452 (House-trespass after preparation for hurt, assault or wrong­ful restraint), 376 (Punishment for rape), and 511 (Punishment for attempting to commit offences punishable with imprisonment for life or other imprisonment).